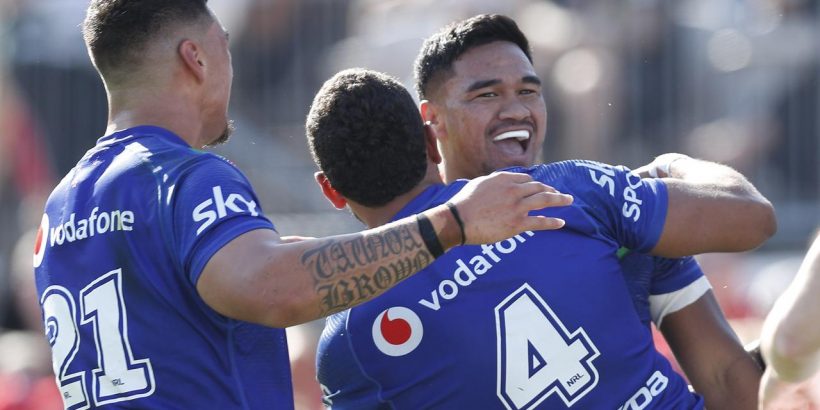 Matt Dufty described Roger Tuivasa-Sheck as one of the world’s best fullbacks of the last few years during the week, before setting himself the task of being better than him on Sunday.

And for a few minutes, when Dufty showed off his trademark speed to give St George Illawarra the lead midway through the second half, he was.

But Tuivasa-Sheck also proved why he was once crowned the Dally M medallist with a sensational solo try, beating three defenders to claim the game-deciding four-pointer.

Kodi Nikorima then sealed the 20-14 win with a penalty goal, not only ending a two-game losing slide, but snapping a four-game Dragons winning streak that had their fans dreaming of a finals tilt.

Tuivasa-Sheck’s clutch play capped off a vintage performance in his 100th game for the club, which included a game-high 233 metres, seven tackle breaks and two line breaks to go with his try.

His contribution also comes a week after coach Nathan Brown chastised his halves for leaving Tuivasa-Sheck running around like a goose in last week’s heartbreaking loss to Manly.

The Warriors laid the foundation for the win by completing a near perfect 39 of 40 sets, eclipsing the remarkable 45 from 47 they finished with in the corresponding fixture last season.

The win lifts Brown’s side into the top eight with a 3-3 record – the first time the New Zealand-based club have been in the top half of the ladder this deep into a season since 2018.

It is also their first victory in Kogarah in 17 years.

Josh McGuire sported the Red V for the first time on Sunday.Source:Getty Images

Six minutes into his comeback from a knee injury, Peta Hiku is again looking at an extended sideline stint after reeling out of a tackle that left him with a suspected shoulder dislocation.

With summer recruit Euan Aitken also at least another month away with an ankle problem, Brown will be scraping the barrel to fill his three-quarter line against Melbourne next week.

Dragons fans have a love-hate relationship with many of their players, and that doesn’t exclude winger Mikaele Ravalawa.

Wing partner Cody Ramsey gave the home side the early lead at Nestrata Jubilee Oval before the visitors took the ascendancy through Tohu Harris and Paul Turner.

But Ravalawa responded by continuing his under-appreciated try-scoring run with a powerful charge to the corner to get the Dragons within four at halftime.

It was the Fijian’s 16th try in his past 19 games, and seven from nine at Kogarah, before Dufty and Tuivasa-Sheck traded four-pointers midway through the second half.

BEN ON HUNT FOR ANZAC CLASH

Halfback Ben Hunt could be a chance to face the Sydney Roosters in their annual Anzac Day clash at the SCG, four weeks after breaking his leg in their round three win over Manly.

Adam Clune is likely to make way for Hunt’s return.