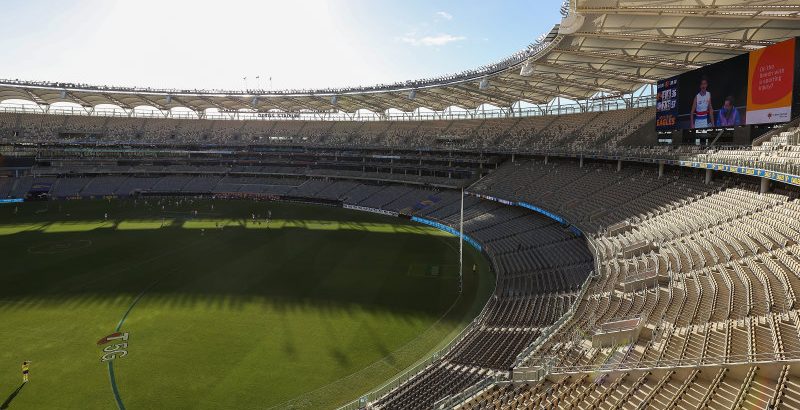 COVID-19 flare-ups around the country have left the AFL running out of options to keep the season going, with Victoria shaping as a potential sanctuary for more clubs.

With Sydney and Greater Western Sydney already marooned in Victoria for another week, at least two round 16 matches were cast into doubt after another day of pandemic-related drama. 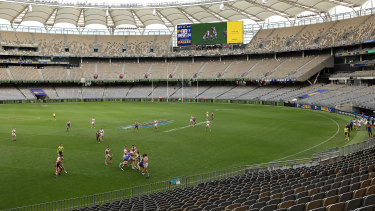 An empty Optus Stadium greeted the Western Bulldogs for their clash with West Coast.Credit:Getty Images

Carlton coach David Teague said at this stage he expected the Blues to fly to Perth on Friday to take on Fremantle on Saturday night at Optus Stadium, but there is uncertainty surrounding that clash after Western Australia tightened its community restrictions in the wake of a positive case which forced Sunday’s West Coast-Western Bulldogs match to be played behind closed doors.

Meanwhile, Adelaide coach Matthew Nicks said his club was open to the prospect of further hubs with the Crows’ match against the Brisbane Lions at Adelaide Oval next Saturday also in doubt after the SA Government closed its border to Queensland on Sunday following fresh cases in the Sunshine State. 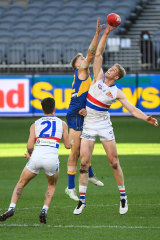 Tim English competes in the ruck against Oscar Allen with the empty Optus Stadium stands in the background.Credit:Getty Images

Sources confirmed Lions players who had planned to attend Sunday night’s rugby league state of origin game at Suncorp Stadium were told not to attend by the club as a precautionary measure.

With NSW in lockdown, SA tightening its borders, and both Queensland and WA having fresh cases over the weekend, Victoria is firming to welcome more non-Victorian teams, although sources indicated there were no firm plans yet in place as of Sunday night.

Meanwhile, Bulldogs coach Luke Beveridge said he expected a smooth passage back into Victoria via Tullamarine, despite the airport being listed as a Tier 2 exposure site.

The Dogs are scheduled to play North Melbourne next Sunday but the Kangaroos’ players, coaches and staff are currently waiting negative COVID tests after they passed through Tullamarine on Saturday morning on their way to Hobart.

But Beveridge said he expected his side would not face too many hassles getting back to Melbourne from Perth after Sunday’s win over West Coast.

“Obviously Mark McGowan and the West Australian government are really proactive in shutting things down when there’s any type of risk,” Beveridge said.

“I’d imagine it’ll be a simple case of coming back, being tested again, getting a negative result from that and being free to go. I’m pretty sure that’ll be the case.”

“We don’t live in a perfect world. We all live in difficult and challenging times. Melbourne has been through four or five lockdowns.”

However, Eagles coach Adam Simpson said he knew little about his side’s travel plans ahead of a clash with Sydney in Geelong on Sunday.

“All those issues and challenges about how to handle it are in the past. Tell us what we’re doing and we’ll do it,” Simpson said.

“We’ve hardly been affected at all. Even today, no crowd, that’s fine, we’ve been here before.

“The fact we’re playing in Geelong doesn’t affect us either, it is what it is. For us to get anywhere this year, we’ve got to win anywhere, any time.”

At the MCG, following their loss to Hawthorn, GWS coach Leon Cameron made it clear he did not want to make excuses for his side as they stare down the barrel of an extended time away from home.

The Giants and Swans were relocated out of Sydney into Victoria on Tuesday night following an outbreak in their home state.

“We don’t live in a perfect world. We all live in difficult and challenging times. Melbourne has been through four or five lockdowns,” Cameron said.

“We know some of the challenges that sit just outside the footy ground. But we started particularly well today so we are not saying because we had to shift down to Melbourne we lost the game.”

Cameron said his side’s accommodation was great and they had been welcomed warmly by all in Melbourne, but that they would continue to monitor whether any players would have to go home to be with family.

“Our boys are all pretty good at the moment. We will keep monitoring that [if anyone needs to go home to be with family in lockdown],” he said.

“You always have those challenges, the balance of family and playing professional sport. One good thing is we keep discussing it but equally we are here to play footy and fulfil our professional duties because we are lucky enough to do that.

“We aren’t silly, we clock in with lots of people at home who no doubt have got some challenges ahead with what is happening up in Sydney.”