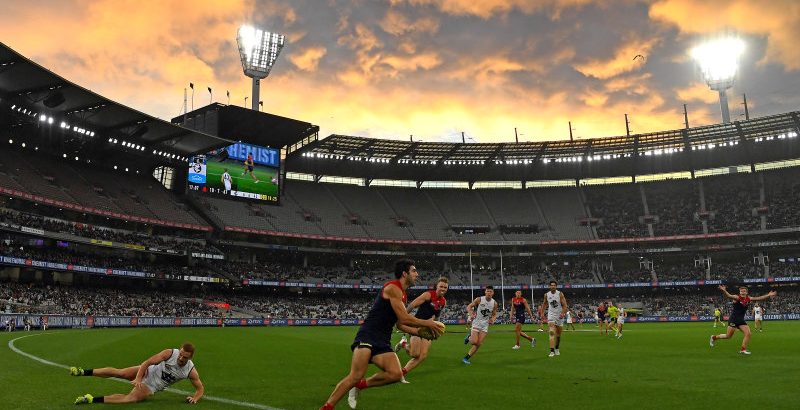 Acting Premier James Merlino announced that restrictions in Victoria would be gradually eased, with outdoor stadiums allowed 50 per cent of the venue’s capacity up to a limit of 25,000 attendees at each of the five AFL games scheduled in Victoria this weekend at the ’G and Marvel Stadium. 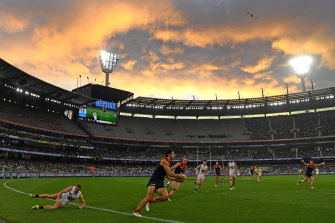 The MCG and other stadia will return to 85 per cent capacity next week.Credit:Getty Images

That limit will then increase to 85 percent capacity the following weekend, which was the pre-lockdown threshold.

Geelong will also be allowed to have 85 percent capacity at GMHBA Stadium in round 16 when the Cats host Essendon at the venue for the first time since 1993.

The announcement came less than 24 hours after both Sydney-based AFL teams lobbed in Melbourne on Tuesday night on an 8pm flight from Sydney. They evacuated just before Victoria stopped people living in areas in NSW that have been declared red zones from travelling to Victoria.

The Swans were tested on Tuesday night and are expecting to go into a hard lockdown at 5pm on Wednesday afternoon to ensure they obtain an exemption to travel to Adelaide to play Port Adelaide on Saturday.

The Swans were expecting, subject to an exemption being granted, to follow the same onerous protocols Collingwood and Geelong followed in recent weeks before playing at Adelaide Oval.

The Giants are living under the same restrictions as people in Victoria as they prepare to play Hawthorn at the MCG on Sunday after their game was relocated from Giants Stadium.

The Giants are likely to remain in Melbourne for a week while NSW deals with the Bondi cluster ahead of their clash against Melbourne at the MCG next week.

The Swans were waiting to see whether their round 16 match against West Coast, scheduled for the SCG, would need to be moved.

Meanwhile, Melbourne City will host the A-League grand final after league chiefs gave the go-ahead for the championship decider against Sydney FC to take place at AAMI Park.

Anticipating restrictions on travel, Sydney FC relocated all their players living in classified red zones into apartments near their training ground in North Ryde, which is yet to be affected by the clusters.
Players and their families were moved out of their homes late on Tuesday night and will undergo COVID-19 testing before travelling to Melbourne.

A-League commissioner Greg O’Rourke offered his thanks to the Victorian government for helping to ensure the game could be played in Melbourne, after last weekend’s semi-final against Macarthur FC had to be switched to Sydney due to restrictions.

“Together with all our stakeholders, we have been working through multiple scenarios to make sure we produce the best possible outcome for football and for the fans,” O’Rourke said.

“We’ve got two teams looking to make history by winning the grand final and we can’t wait to see it all happen on Sunday.“

On Wednesday morning, City’s star striker Jamie Maclaren, who has signed a new two-year deal with the club but cannot play in the grand final because he is in quarantine after playing in the Socceroos’ World Cup qualifiers in Kuwait earlier this month, made it clear that City felt there was no other equitable option than to play in Melbourne.

“I think it’s very clear. It has to be in Melbourne – even if it was delayed. If I have to call Greg O’Rourke I will,” Maclaren said.

“We have been the stand-out team and we deserve that right. Our fans and our club have done it tough and we deserve it. We will leave it to the suits, but it should be in Melbourne.

“I want to be a legend at this club, and no better place than my home town.″⁣