Warriors prop Kane Evans has been fined $5000 by the NRL after he was caught with an obscenity on his strapping during Sunday’s clash with Penrith.

Head coach Nathan Brown revealed on Wednesday a punishment had already been handed down by the NRL and defended his player, calling him a “terrific bloke”.

Evans, who was nominated as 18th man for the game, found himself in hot water after cameras picked up the words “fold some c—” on his wrist tape.

“We don’t need to sanction Kane, the NRL has already done that,” Brown said. “They have given him a $5000 fine so it was an expensive piece of writing, I suppose you could say.

“If that is the worst thing Kane Evans does, well he has copped a kick up the backside and we will move on with it.

“Kane is a good lad who has only been with us short term. But good people do some silly things sometimes and, on this occasion, Kane has done something that as a club we feel is a little bit silly.” 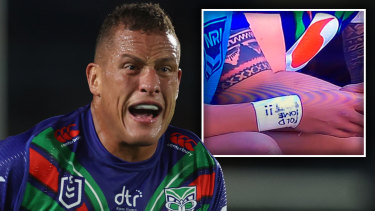 Kane Evans and the obscene message on his wrist strapping.Credit:Getty, Screengrab

Meanwhile, Bulldogs winger Jayden Okunbor has thanked the club for its show of faith in re-signing him for another two years.

Okunbor was originally deregistered by the NRL following the Port Macquarie schoolgirl sex scandal in 2020 before he was reinstated on appeal. He then tore his ACL during the club’s final regular-season match of that campaign.

Despite the chaotic year, Okunbor said he managed to win over incoming coach Trent Barrett with his overall work ethic.

“Last year, Baz called me and said he wanted me at the club and he’s put a lot of trust in me,” Okunbor said. “I’ve got to repay the club, I feel. They took a big chance in letting me come back and I didn’t want to let them down.

“[Baz] said he liked seeing how hard I worked during the pre-season. He knew that I was going through a bit of a tough time with the injury coming in every day knowing I was so far away from playing.

“He saw that I stayed optimistic and I’d like to think that’s something he wanted in the club.”

Okunbor will join Tevita Pangai jnr next year after the Broncos star was granted a release from the final year of his deal at the Broncos.

Pangai jnr will join the Bulldogs on a three-year deal from next season after signing a contract this week believed to worth $2.2 million.