After ambushing the Power in a majestic opening term, the Bulldogs were stopped in their tracks and humbled in the second quarter before rising to the occasion with a stirring response after half-time. 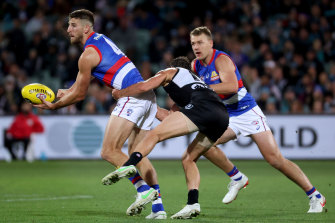 “There aren’t enough superlatives to describe him [Bontempelli] as a player and as a person,” Beveridge said.

“That goal he kicked in the first quarter was just sublime. He’s an outstanding person and such a brilliant, match-winning footballer.

“Libba is having an enormous year. We’re really grateful for what he’s doing.

“He’s always done the mother load of that inside work … the grunt and grit that’s required in there.“

While the Dogs’ midfield continues to fire on all cylinders and their forward line remains, statistically, the best in the comp, their defence will be tested in coming weeks after 2016 premiership captain Easton Wood limped off Adelaide Oval in the first quarter with a hamstring injury.

Wood has endured a history of misfortune with both hamstrings and faces a lengthy stint on the sidelines, beginning with next Saturday against St Kilda and the following week against Melbourne, which looms as a clash for top spot.

“It’s a hamstring … hopefully not as bad as some of the other ones he’s done,” Beveridge said.

“I did ask him that [which hamstring] but he’s had that many on both sides they’ve all blurred into each other.

“With Bailey Williams coming back in, the competition through that area [defence] is healthy, so we should be able to cover it, as much as Easton’s an outstanding player.

“You look at those times with a glass half-full outlook because at some point we’ll get him back and that’ll be a good thing.″⁣

The Power look set to tackle Collingwood next Sunday at the MCG without defender Tom Clurey, who was taken to hospital with his mouth bleeding after a head collision with Mitch Hannan.

“Tom was speaking but it was a whack right in front of the face that might put him in some significant doubt for a little while.″⁣

The Power slipped out of the four with the defeat and face renewed questions around their credentials against quality opposition. They are 5-0 against teams outside the eight and 1-3 against sides in the eight.

“We absolutely know where we’re at,” Hinkley said. “We’re good, but we’re not great yet.