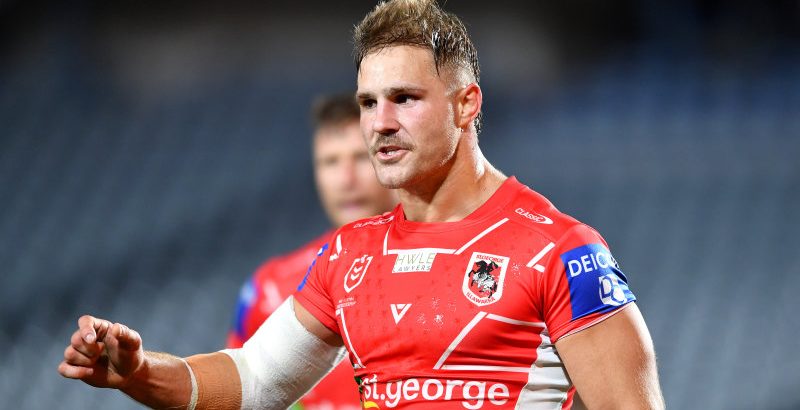 Six weeks after Jack de Belin misled the NRL and St George Illawarra officials about his whereabouts on the night of Paul Vaughan’s house party, Dragons coach Anthony Griffin was considering naming him captain for this weekend.

In what would have been one of the most controversial decisions of Griffin’s short tenure at the Dragons, de Belin was put forward as a potential skipper for this Sunday’s clash with the Sydney Roosters before an 11th-hour change of heart. 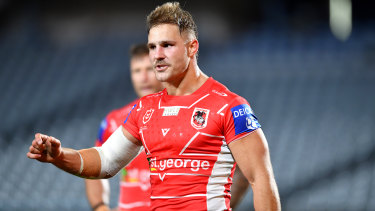 The notion was met with resistance from some within the organisation during a discussion between Dragons powerbrokers on Tuesday, with the club instead opting to hand Tariq Sims the armband when the official team list was named at 4pm yesterday.

Dragons chief executive Ryan Webb confirmed there had been a discussion about the captaincy but declined to comment on the issue when contacted by the Herald on Tuesday.

The Herald also contacted Griffin, but he did not respond.

One of the main reasons St George Illawarra signed Griffin to replace Paul McGregor as coach was because of his reputation as a strict disciplinarian. That would have been undermined had he named de Belin as captain, given the deception behind the events that ultimately cost Vaughan his Dragons contract. 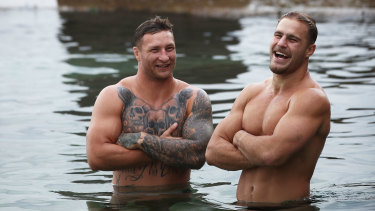 Tariq Sims (left), not Jack de Belin (right), will captain the Dragons this weekend. The pair were part of the NSW Blues set up in 2018.Credit:Getty

De Belin, like the 12 other players in attendance, was fined and suspended for attending Vaughan’s Shellharbour home despite NSW public health orders prohibiting them from attending. De Belin reportedly hid underneath a bed in Vaughan’s house when NSW Police came to break up the house party and was not one of the 12 players initially fined by police.

The party was in breach of the game’s biosecurity protocols and disregarded a directive from Griffin, who had denied the players’ requests for a team bonding session at WIN Stadium due to heightened concerns over the state’s growing COVID-19 problem.

It also would have come just two months after de Belin returned to the sport following a three-year lay-off fighting rape charges in court. Charges were dropped in May after two mistrials, allowing de Belin to return to the Dragons mid-season.

The door opened for de Belin to potentially captain the club last week when stand-in skipper Andrew McCullough suffered an injury deputising for Ben Hunt. The injuries have left a void in the club’s leadership, but Griffin has gone with Sims, a NSW State of Origin representative, to lead the club in the absence of the experienced duo.

Griffin is no stranger to controversy, having led the pursuit of Israel Folau at the start of the year. Griffin met Folau in the off-season and convinced the Dragons to throw the dual international a lifeline after returning home from a Super League stint with Catalans.

Following backlash from fans and sponsors after the Herald revealed the Dragons’ pursuit of Folau in February, the club dropped its interest a couple of days later.

Griffin’s selections have also come under fire of late, with the decision not to renew the contract of fullback Matt Dufty dividing supporters.

His continued selection of the under-siege Corey Norman, who will depart the club at the end of the season, has also proved unpopular with fans. The Dragons have once again named Norman in the halves for this weekend, but rookie sensation Junior Amone will wear the No.6 against the Roosters.

The Dragons have also opted to play Josh McGuire at hooker as a replacement for the injured McCullough. Dufty will also return to the team at fullback, forcing Jack Bird back to the centres.

Sports news, results and expert commentary. Sign up for our Sport newsletter