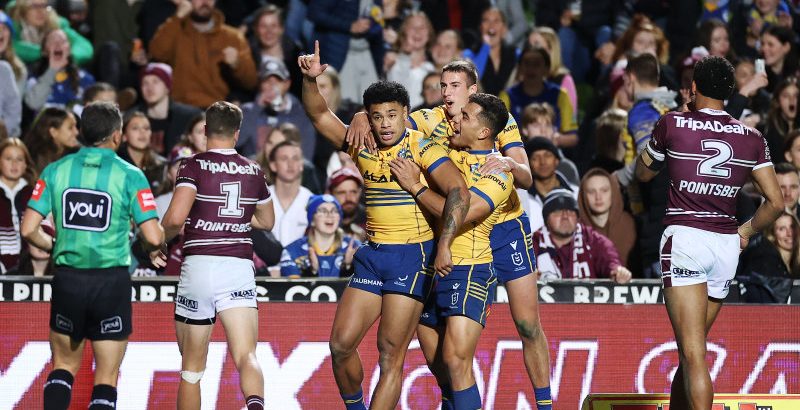 4 Pines Park: They might want to think twice about booing Jake Arthur.

The Parramatta coach’s son set up a couple of crucial second-half tries as the Eels all but ended Manly’s season on Friday night.

Arthur was sensationally booed by his own fans a fortnight ago, then handed the No.7 jersey by his dad, Eels coach Brad Arthur, following an injury to regular halfback Mitchell Moses.

Despite failing to make a mark in the first half, and copping his share of criticism from fans on social media when he struggled to keep pace with Sea Eagles flyer Jason Saab, Arthur produced a wonderful cutout pass for Waqa Blake to score.

Blake produced one of the finishes of the season when he caught Arthur’s pass and somehow planted the ball down in the right corner. Arthur then put through a well-weighted kick for his childhood mate Will Penisini to score.

No teenager should be exposed to such shocking abuse like Arthur was, so he deserved credit for the way he responded on the big stage. 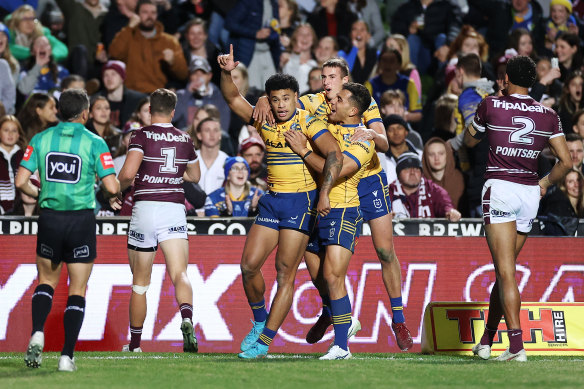 “All the boys have been really good to me, I haven’t really worried about it or heard [the criticism],” a beaming Arthur said after the game.

Andrew Johns spent time working with Arthur at the Eels and was thrilled for the lanky playmaker. Johns described the abuse he had copped on social media as “absolute rubbish”.

“I don’t think I’ve seen a young player work so hard on his game, he just wants it so badly,” Johns said on the Nine coverage. “He was absolutely smashed on social media … he came into this game under pressure, his dad is the coach, but he has really stood up in the absence of Mitchell Moses. I’m really happy for the young man.”

If Arthur – and Brad – felt vindicated by the 36-20 win, skipper Clint Gutherson was the Eel who stole the show.

The man who grew up in Manly and still calls the northern beaches home scored a long-range try and set up another three. What Gutherson lacks in sheer class he makes up for in enthusiasm and effort.

His competitiveness is a good enough reason alone to give the blue and golds some hope when September rolls around. The only knock on his game on Friday night was his missed conversion attempts, as well as a stinker of a field-goal attempt right on full-time when most of the locals had already cleared out of 4 Pines Park.

Manly needed a victory to keep their finals hopes alive. They will finish the weekend at least four points adrift of the top eight. They will need the same divine intervention that all but derailed their season eight days earlier.

They were pumped to put on a performance, with five of the seven players who boycotted last week’s game over the rainbow jersey back in action.

They did well to hit the front midway through the first half after being starved of possession, and found plenty of joy down the left edge through Kieran Foran and Jason Saab. But they could not hold out their western Sydney rivals who wanted it more.

To makes matters worse, Foran failed to finish the game with an injured hamstring. The No.6 has been one of the Sea Eagles’ best this year, and will begrudgingly depart at season’s end for the Gold Coast who await Manly next weekend. The Eels will host South Sydney in what will be another solid hitout.

Bunker official Grant Atkins was kept busy in the second half, but nailed three tight calls.

This was Parramatta’s night. Jake Arthur will not forget it any time soon.