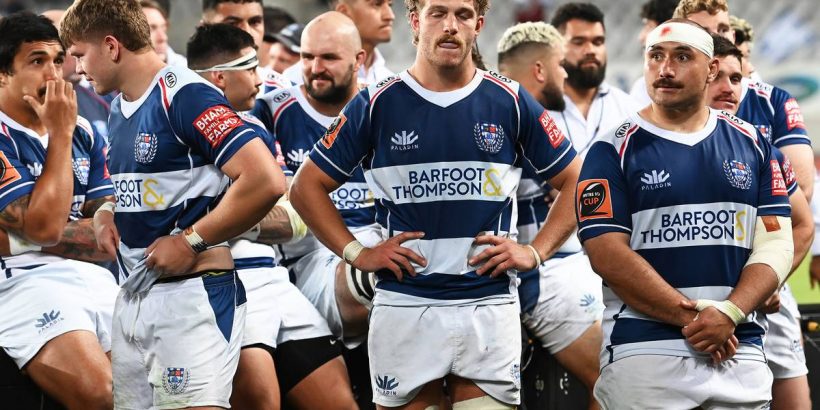 All is not well within New Zealand’s largest provincial union.

A review into Auckland’s provincial side, and subsequent feedback from senior Blues management, has allegedly led to the resignation of an assistant coach and the potential exodus of headline All Blacks to rival unions.

The Herald understands discontent within the Auckland squad that lost last year’s Championship final at Eden Park to Tasman has seen several All Blacks, including Blues No 8 Hoskins Sotutu and prop Ofa Tuungafasi, approach rival unions.

Seeking to exit the Auckland team, Sotutu is understood to be in talks with Counties Manukau while Tuungafasi has approached Northland.

Fellow All Blacks Caleb Clarke, Akira Ioane and flanker Blake Gibson are understood to be among others weighing their futures with Auckland. Ioane is thought to have told Blues teammates he could represent Northland, as his grandfather on mother’s side lives Kaikohe.

The review and later feedback from Blues chief executive Andrew Hore is believed to have conveyed fractured relationships between some players and coaches and the need for better communication channels.

Frustration around last year’s player payments, which were eventually made in full after Auckland’s $120,000 funding cut by New Zealand Rugby due to the Covid-19 impacts, are believed to have contributed to unrest within the team.

“We made an announcement to our community this week that Filo has resigned,” Bear said. “We’ve acknowledged over the past three years he’s had a massive contribution. He’s generated three semifinals, two home finals and one championship in 2018.

“He’s been big across our coaching development space so we wish Filo all the best for the future.

“Through the review we identified some areas we’re going to improve, evolve and change.

“There were areas within the coaches as well as the wider management team where we can improve, along with making sure we provide clear direct feedback to the players around selection and their development.

“There were a number of different areas we identified as work-ons.

“We’ve committed to the players that we’re going to be advancing the high performance environment to support them so they can be the best they can be.”

Auckland captured their first title in 11 years when head coach Alama Ieremia, the former All Blacks second five-eighth turned Hurricanes assistant and Samoa head coach, and forwards mentor Tiatia came on board in 2018 to seemingly transform the previous struggling team.

Auckland has since lost one semifinal and last year’s home final, both against Tasman.

Well-placed sources allege that relationships within the team have deteriorated since that breakthrough title in 2018.

Tensions appear to have built during the past two seasons, with some long-serving support staff understood to have emulated the players’ concerns.

Lavea had been earmarked as a future Auckland head coach.

Bear said the Auckland squad is 90 per cent complete for the upcoming season but confirmed the likes of Sotutu and Tuungafasi, both of whom are local, homegrown All Blacks, could leave the team.

“There’s a couple of players we’re continuing conversations with along with their agents. We’ll continue to advance those conversations and see where they land,” Bear said.

“Player movement is a thing of modern-day times. We want to secure as many of the best players as we can so we’d like to keep hold of all players developed in Auckland and give them every opportunity.”

Several meetings have been held with players and coaches in recent weeks since the review was completed, with progress said to be positive.

“We’ve got a clear set of actions and we’ve talked that through with the players and we’re committed to bringing those to life,” Bear said.

Asked whether Ieremia, who has two years to run on his contract, had the backing of the players, Bear said: “Alama has got clear expectations around the need to remain relevant and evolve and improve. That’s an ongoing piece and he’s committed to making sure he’s working hard to deliver around the areas we want to improve.”

Ieremia and Tiatia declined to comment when approached by the Herald.

On Tuesday Tiatia posted on social media saying after three successful years it was the right time to move on.

“I’m excited and looking forward to spending more time with my family and optimistic on what opportunities arise moving forward,” Tiatia said.

All Blacks typically play few, if any, games for their provincial teams in the modern age, unless working their way back from injury, as the domestic season clashes with test commitments.

Provincial unions are, however, fully reimbursed for their All Blacks’ salaries. High-profile recruits are often used in sales pitches to attract members, and with duties in the community.