There was bad injury news for both Majak Daw and Dale Morris on Monday, with the North Melbourne defender ruled out for the season with a hamstring injury and the Western Bulldogs veteran going under the knife after scans confirmed he had torn his ACL.

Playing his fourth VFL game in a row after missing the first half of the season following his fall from the Bolte Bridge last December, Daw was unable to play out North's game against the Northern Blues on the weekend after hurting his hamstring. 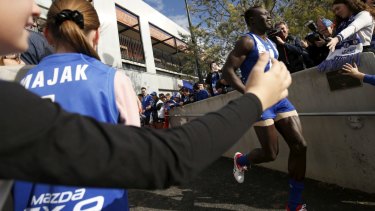 Fans have lined up to support Majak Daw in the VFL since his comeback from a broken hip.Credit:Darrian Traynor

Scans revealed a tear that would require a six-week layoff. The Kangaroos have opted to rule Daw out for the rest of the season, but outgoing North football chief Cameron Joyce said on the club's website that the Roos were optimistic about Daw being ready for the start of pre-season.

"Majak was running at speed and stumbled forward, putting his hamstring under immense pressure and strain," Joyce said.

"With only four games until the end of the season, unfortunately he won't be able to recover in time to make it back to playing this season. The scans revealed a decent tear and it would normally be a six-week injury."

Daw had been aiming to play again at AFL level this year.

"Each week he played, we carefully increased his minutes by a quarter and he was set to play his first full game on Saturday," Joyce said.

"It's really disappointing for him not to be able to get back for an AFL game, which was his goal, but he should take a lot of confidence out of his incredible effort in getting back to playing so quickly, considering the injuries he had.

"No one should underestimate the level of determination, courage and will power Majak has shown over the past six or so months. 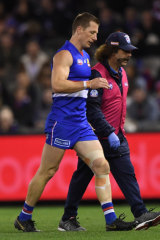 Over and out? Dale Morris is set for another year on the sidelines after tearing his ACL again.Credit:AAP

"We will now ensure he has all the support he needs to come back stronger and ready for day one of the 2020 pre-season."

While Daw should be ready to go for the start of the pre-season, the same cannot be said of Morris.

Playing his first senior game this year, Morris' left knee buckled on the wing during the third quarter of the Bulldogs' win over Fremantle at Marvel Stadium on Sunday.

The Dogs suspected he had again torn his ACL, with the diagnosis confirmed on Monday, at which point Morris was sent for surgery.

For the second year running he decided against having a traditional knee reconstruction following a pre-season ACL tear.

While Morris got through last season, his AFL return was less successful.

"Although he passed every test, ticked every box in rehab and returned to play a month of VFL football, unfortunately Dale's knee was unable to withstand the high demands of AFL football."

Morris, who turns 37 in December, had been given the last five matches of the season to prove he deserved a new contract.

The Dogs are yet to make a call on Morris' future but given his age and the fact he is facing about 12 months on the sidelines, another year on the club's list appears unlikely.