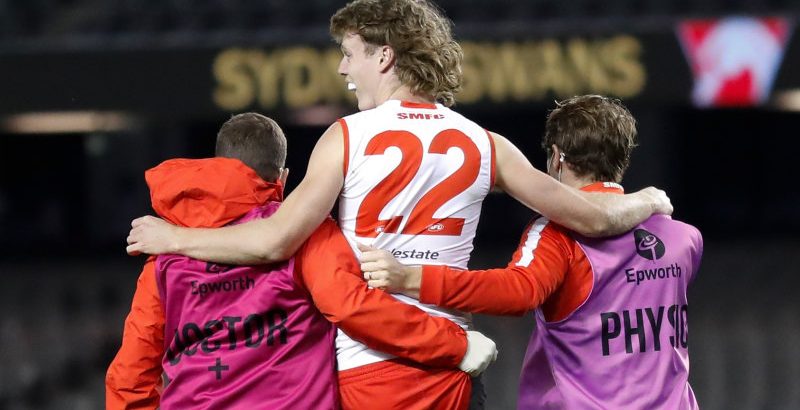 Nick Blakey’s season is over and Josh Kennedy is at risk of missing Sydney’s first AFL final due to a hamstring strain, but the Swans are set to welcome back three big names for their last home-and-away assignment of the year.

There was mixed news on the injury front for the Swans on Monday as in-form utility Blakey was ruled out for the rest of the year, while Kennedy was sent for scans to survey the damage he sustained in the final moments of Saturday night’s 14-point win over North Melbourne. 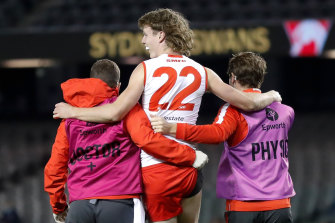 Nick Blakey’s injury looms as a big blow for the Swans before the finals.Credit:Getty

Blakey limped off after landing awkwardly on his right ankle in a marking contest during the third quarter against the Kangaroos. The injury was revealed as a cracked fibula rather than syndesmosis or anything ligament-related.

It’s a cruel blow for Sydney and for the 21-year-old, who appeared to have finally found his niche at AFL level in his new role across half-back. Blakey will now see a specialist and is likely to have a metal plate inserted over the crack in the lower part of his leg but should be right for day one of pre-season training, coach John Longmire said.

“He’s learning the craft of playing defence and getting better every week. It’s really disappointing for him . . . he was getting to be a really valuable asset across half-back,” Longmire said.

The Swans will at least regain a like-for-like replacement in Jake Lloyd for this weekend’s clash with the Gold Coast Suns, while Callum Mills (Achilles) and Lance Franklin (rested) are also expected to return.

But the AFL’s decision to can the pre-finals bye, which is expected to be confirmed publicly later on Monday, could result in Swans co-captain Kennedy missing a likely elimination final derby clash against Greater Western Sydney.

Kennedy, 33, won’t face the Suns, but Longmire was optimistic about the veteran midfielder’s prognosis beyond this weekend, saying he had pulled up well but admitting scans later on Monday would determine his availability for the first week of finals.

“We suspect he’s got a very low-grade hamstring [strain], it’ll only be very minor,” Longmire said. “We’ll see how he is for next week, but the scan will give us a bit more information.”

Franklin was spared from the North Melbourne clash as a precautionary measure once word filtered through that the AFL was considering scrapping the pre-finals bye.

“We went with that last week, particularly regarding Lance, to be able to train him hard during the week in the gym and on the training track,” Longmire said.

“We’d been aware he’d had 13 games in a row – seven since the bye –and we didn’t want his load to get to the point where it’s impacting his training too much. He was keen to play . . . but we just felt that once it got to the point of only one game left before the start of the finals series that last week was the time to do it.”

Longmire said no other players needed to be rested this weekend ahead of a match that will have no real bearing on Sydney’s final ladder position now that they cannot finish lower than sixth.

The Swans are guaranteed a “home” elimination final regardless of the result against the Suns. If the Giants beat Carlton this weekend, they will be locked in as Sydney’s opponents.

Where that home final will be played is less clear. Longmire said he was unsure of the process that would determine the venue for the match and to what extent the Swans will have a say in it, given the worsening COVID-19 situation across the country.

“There’s a lot of speculation about what would happen and if and that, and you just don’t know,” he said.

“So this is a great example of why we do concentrate on the team that’s very much in front of us, the Gold Coast Suns. They’ve played well against us the last couple of times. That’s why we do live in the moment. You try not to get caught up in that too much as a coach and as a footy department.”