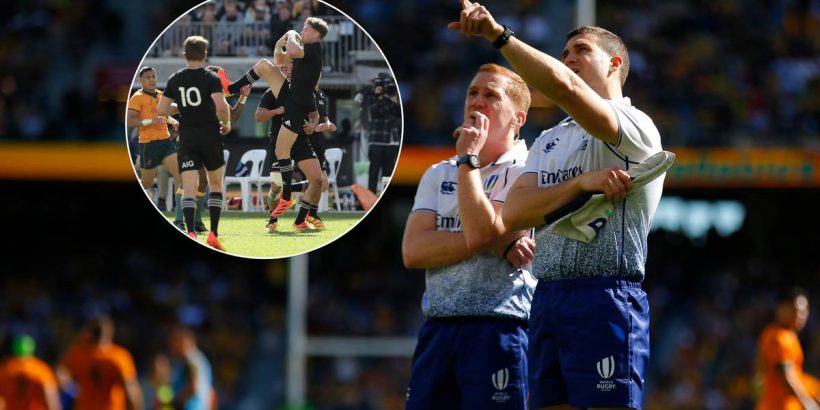 An unintentional (probably) kung fu kick has the rugby world seeing red – but a closer examination of the laws of the game suggests there isn’t much controversy to Jordie Barrett’s red card after all.

Barrett was sent off on Sunday in the All Blacks’ 38-21 victory over the Wallabies in Perth after his boot came into contact with Aussie winger Marika Koroibete’s face during an aerial contest for the ball.

With the All Blacks up 13-0 after 27 minutes, Barrett collected a high ball from the boot of Tom Banks. As he went up to catch the ball in the air, Barrett’s right foot was raised awkwardly and made contact with Koroibete’s face as the Wallaby rushed to close the ball down.

After consulting with the TMO, referee Damon Murphy brandished the red card, explaining to Barrett: “Contact with the head with your foot, no other result than a red card.”

The red card ultimately didn’t cost the All Blacks the result, while the current 20-minute red card trial meant the visitors were able to replace Barrett after 20 minutes with Damian McKenzie.

But the decision, like most high profile red cards in rugby, sparked debate among the media, players and fans.

All Blacks coach Ian Foster even indicated that he intends to challenge the ruling when it reaches the citing commissioner.

So did the referee get it right? Based on the current World Rugby laws of the game, Barrett’s reckless play was only going to result in one decision: a red card.

As of March 2021, World Rugby has developed a “Head Contact Process” to aid referees with decision making when contact to the head is made.

According to World Rugby, the law application guidelines are based on a “zero tolerance of foul play, especially where head contact occurs”.

The process is based on four questions. Let’s follow the process step by step:

2. Was there any foul play?

Under rule 9.11 in World Rugby’s foul play laws, “players must not do anything that is reckless or dangerous to others”. It’s probably not controversial to say that Barrett’s raised foot at head height while in the air qualifies as foul play. World Rugby states that considerations include: intentional, reckless, avoidable. Barrett’s ‘kick’ seems to qualify for at least two of those considerations. So, the answer is yes.

3. What was the degree of danger?

Here is where some interpretation is required. World Rugby’s considerations in this area are: direct vs indirect contact and high force vs low force.

At the end of the day, Barrett’s foot made direct and significant contact Koroibete’s face/head. So the degree of danger for Koroibete in that instance was high, as the referee landed on. So the answer is yes, again.

4. Is there any mitigation?

Here is where the crux of the issue seems to be, based the reaction from commentators and fans.

Things to consider from World Rugby are:
– Line of sight
– Sudden and significant drop or movement
– Clear attempt to change height
– Level of control
– Upright – passive vs dynamic

The key aspect of the rule, however, is that “mitigation will not apply for intentional or highly reckless acts of foul play”. It seems more than reasonable to classify having your studs raised to make contact with a six-foot tall man’s face as “highly reckless”.

Barrett’s jump and time in the air wasn’t affected by another player. His foot was simply raised recklessly, and his opponent’s head paid the price.

So the answer is no for mitigation. And that’s likely the decision-making process behind Barrett’s red card on Sunday.

Are the current laws of the game fair?

Regardless of the reasoning behind World Rugby’s laws, whether it’s out of genuine concern for player welfare or just creating a set of rules that would avoid litigation further down the line as CTE and concussion issues become more prevalent, the laws are out in the open and known by the players.

In football, you can’t tackle a player with two feet, regardless of the amount of contact you make with a player or the ball. You simply cannot tackle with two feet, and risk getting sent off if you do.

This seems to be the kind of rationale applied to many acts of foul play in rugby. If you jump in the air, like Barrett did, and have a swinging foot recklessly dangling at head height, you risk getting a red card if you make contact with someone’s head.

Sport is about risk management. If you anticipate a pass, you might have an open intercept try on your hands; if you mistime it, you leave a gap in the defence. If you jump in the air with wild technique, you risk kicking someone in the face and possibly a red card.

Barrett’s technique was ultimately awkward and poor. The result was a red card. Whether it was fair that he was sent off, or if the laws need changing, is a different discussion to the laws of the game as it stands.

Wallabies coach Dave Rennie provided perhaps the most even-handed comment on the red card after the game: “I think it’s good that we have a 20-minute red card at the moment, because it’s certainly not malicious. But based on law, when you field a ball, kick your foot out and hit someone in the head, there’s going to be repercussions for that. So, I think the decision is probably accurate, and the fact it’s only 20 minutes is a good thing.”

This story first appeared on ‘The Back Page’, the Herald’s weekly newsletter that recaps the big issues from the past week of sporting news. To receive the newsletter in your inbox every Monday, you can subscribe here.