Collingwood has suffered a huge blow for Friday night's blockbuster against Richmond, with midfielder Taylor Adams withdrawing due to hamstring tightness.

The big-bodied midfielder will be replaced by Ben Crocker, who has played the past two matches for the Magpies.

Adams has had a wretched run with injury this season, with an adductor injury keeping him out for all but one game since round 7.

He returned last week after playing in the VFL a week earlier, but was ruled out on Friday morning with hamstring tightness. 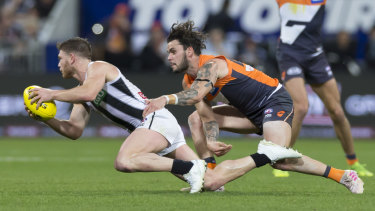 Collingwood’s Taylor Adams is back on the sidelines after returning against GWS last weekend.Credit:AAP

The injury is a blow, with Brayden Sier also unavailable after hurting his calf at training this week.

Meanwhile, Richmond is breathing a sigh of relief that their skipper, Trent Cotchin, will be available, as his wife Brooke is due to give birth.

The Tigers confirmed that all remained on track for Cotchin to take his place for the crucial match that will determine which team sits in the top four overnight.