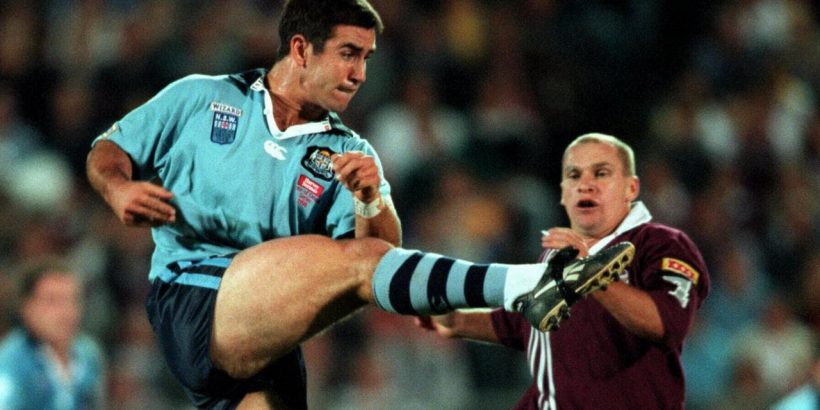 And when it comes to the state’s greatest, it’s hard to go past eighth Immortal Andrew Johns.

The man nicknamed “Joey” tormented the Queenslanders in 23 influential Origins for the Blues.

Most importantly for Moses as a halfback, Johns is the perfect role model given he consistently nailed the big Origin moments with the No.7 jumper on his back.

It’s why Fittler has Johns in his corner, even though he isn’t officially part of the Blues coaching staff.

“Absolutely, and I’ve spoken to Joey a fair bit,” Fittler said about Johns, who also mentors Moses at the Eels in a halves coaching role.

“I always talk to him about Parramatta, Mitch and Dylan Brown, so I’ll be talking to Joey.”

Fittler is fortunate to have many strong voices in his corner.

He also can seek the advice of injured halfback Nathan Cleary about how the Blues navigate the attack in his absence.

“I’ll also be talking to Nathan to get some feedback from him about what he thinks will work for us,” he said.

“So, I’ll be listening as much as possible over the next week.”

Moses has been accused of being a “flat track bully” who only excels when his team is on the front foot.

Fittler, though, knows a different player from his experience with him in the 2019 Lebanon World Cup team.

“I’ve coached him before, and I’ve seen him in action,” he said.

“And what I saw was a quality player that can lead a team around.”

Fittler weighed up the South Sydney halves combination of Adam Reynolds and Cody Walker, but he felt Moses and Jack Wighton in the halves created less disruption for the team.

He also has confidence that Moses is ready to excel on the Origin stage.

“We have a relationship from being in the Lebanon World Cup team in 2017, and I felt like I owe that team and those players a lot,” he said.

“So, to be able to ring Mitch and tell him he has got the opportunity to play for NSW, I was extremely grateful.

“I also got a lot of confidence out of his response. He sounded clear and confident, and he is ready to go.

“He knows what is ahead of him, it isn’t going to be easy, and I feel like he is in a really good head space to take it on.”