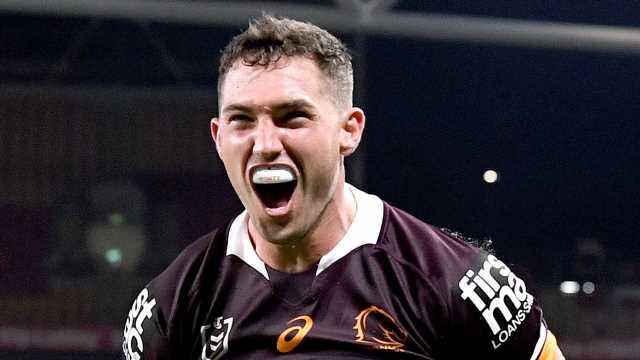 Maybe there are signs of life in the Brisbane Broncos yet.

The Broncos were getting absolutely pummelled by the commentators as the NRL’s most talked about side — for all the wrong reasons — were down 22-0 within 15 minutes to the Gold Coast Titans.

Remarkably, the Broncos turned it around, drawing level at 22-all at halftime, before going on to 36-28.

The 22 point comeback was just short of the 26 point all-time NRL record.

But it was a remarkable comeback as the Broncos piled on 36 unanswered points.

It was one of the more remarkable comebacks in some time and the biggest comeback in the Broncos history, beating an 18-0 comeback against the Raiders in 2006.

It’s also beaten the worst collapse by the Titans, having previously lost three times having lead 14-0.

It was one of the craziest games in some time, with 44 points scored in the first half, arguably one of the great examples of how quickly the momentum shifts can be in the modern game.

At halftime, Kevin Walters delivered what is becoming a trademark fiery speech, probably lambasting the side for the horror first 15 minutes.

A Corey Oates intercept gave the Broncos their first lead of the game.Source:Getty Images

But while many thought the Broncos had turned a corner after taking the Panthers all the way two weeks ago before being slaughtered by the Eels may not know what to think after seeing the latest effort.

The commentators were baffled in the box.

“I thought it was going to be a horrorshow,” Fox League’s Braith Anasta said, mirroring his comments from earlier in the night when the Broncos rebounded.

Social media was blown away by the incredible shootout.

I think my string of tweets sent during the last 40 mins accurately reflect the 🤯 that is this game! I’ve never seen anything like it! #NRL#[email protected]@PhilGould15https://t.co/CY8Go5J2ZQ

This is stunning. The Broncos are averaging 83 metres per set in the 2nd half. The Titans can’t handle them in the middle of the park.

Well I never! Broncos are back, Titans have stopped. All of a sudden defence is out the door! 22-22 & not even half-time! #NRLBroncosTitans

Titans ain’t going anywhere with this defence. 36 vs manly, 40 vs Souths and now 32 and counting against Brisbane. That’s not good enough. Holbrook will be fuming. #NRLBroncosTitans

Loving Titans games to watch this year but their defence is a long way off finals standard. #NRLBroncosTitans

After the game, Fox League analysts Cooper Cronk and Greg Alexander were equally blown away.

“It was a crazy game,” Cronk said. “Obviously the first 15 minutes the Titans were on top, and for a long period of time, we’ve questioned the resilience of the Brisbane Broncos. Well, we’ll have to give them credit.”

Alexander added: “The Broncos came into this match off the back of another big loss. When the Titans led 22-0, I think most people would have thought this could be 40-0 by halftime. It was 15 minutes it took the Titans to get to that lead, the Broncos then scored six unanswered tries and have a comfortable lead.

“It was the turnaround that…I don’t think Kevvie thought they had it in them. But give credit to Kevvie, his face didn’t change from 22-0 to 36-22.

“That is an incredible effort by the Broncos because they have been under more pressure than any club this season, including the Bulldogs.”

What a win from the Broncos.Source:Getty Images

The result is the Broncos’ second win of the season in eight rounds, but their first win not against the Bulldogs since the COVID-19 break in 2020, which paused after round two.

The Titans’ loss is their third straight as the side will likely drop out of the top eight by the end of the round with five other teams below them on the ladder also on six premiership points.