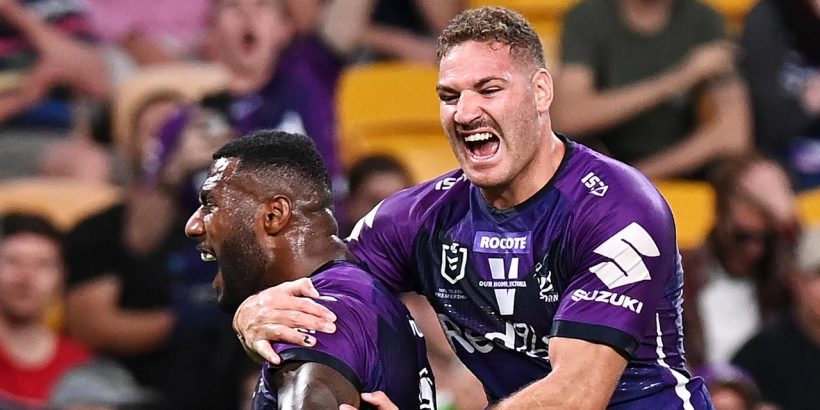 The Brisbane Broncos have reportedly signed Melbourne Storm utility back Brenko Lee on a two-year deal.

The Red Hill outfit has been ramping up their recruitment drive after recently losing a handful of promising young talents — gun teenager Reece Walsh walked to the Warriors while Tom Dearden recently signed with the North Queensland Cowboys.

But on Thursday, Brisbane confirmed they had snared their first significant coup under Kevin Walters, with South Sydney veteran Adam Reynolds joining on a three-year deal.

And the Broncos backline will be further bolstered in 2022 by the addition of Lee, who is capable of playing at centre or wing.

According to The Courier-Mail, the Broncos consider the State of Origin star a replacement for departing winger Xavier Coates — who has reportedly signed with the defending premiers.

The 25-year-old also made his State of Origin debut in 2020, featuring in the Maroons’ 20-14 victory at Brisbane’s Suncorp Stadium last November.

But the Queenslander’s 2021 campaign was halted by a calf injury — he is yet to register an NRL game this year.

“Coming to the Storm has been a life-changing experience mentally and physically,” Lee told NewsCorp last year.

“I nearly gave it away after the Titans told me it was best for us to part ways and go in a different direction. I hold no grudges against anyone. They finished last and some guys had to go.”