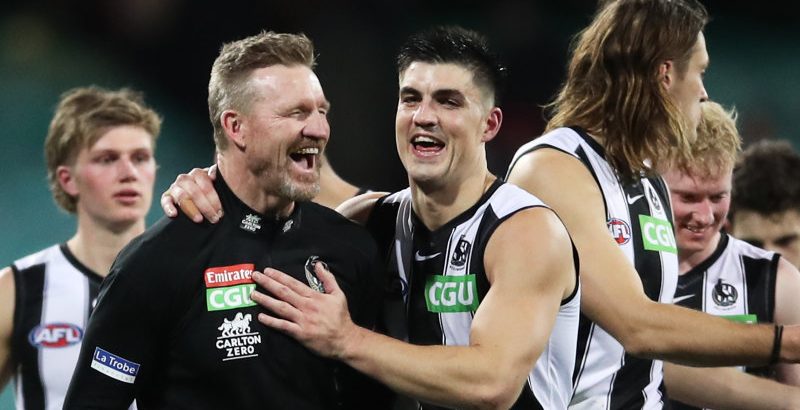 Nathan Buckley may not have been considered the right man to lead a Collingwood resurgence but the former Magpies coach left the AFL with a mid-season parting gift – a blue-print on how to beat Melbourne.

The Demons had won 11 of their 12 matches (their only loss by a point to the Crows in Adelaide) when they met the Magpies in a re-fixtured Queen’s Birthday clash at the SCG in June. The Magpies, in Buckley’s farewell match, held the Demons to a then season-low 63 points in a 17-point win, and coach Simon Goodwin agreed the mid-season bye had come at a good time.

Put simply, the Demons haven’t been the same since. The Magpies, having been cautious and even boring in their ball movement for much of the season to that point, had a dare and purpose. In particular, they looked to go through the middle of the ground as often as possible, and used short, sharp kicks when heading into attacking 50 so that Demons defenders Jake Lever and Steven May, so important to Melbourne’s counter-attack, were left one out, or in no-man’s land. Then came the dialled up forward pressure. 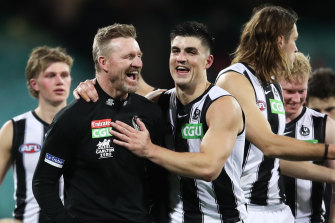 Last laugh: Nathan Buckley after the victory over Melbourne.Credit:Getty Images

Since that defeat, the Demons have failed to score more than 68 points in three of their five matches, have two wins and a draw, and are in need of a boost against the Gold Coast Suns on Saturday.

“I think, like every team, you look at where their strengths are, you look at the opportunities where they lie, and, no doubt, teams have done that to us, like we do to opposition,” Goodwin said on Wednesday when asked about the loss to the Magpies.

“Our ability to adapt and still believe in our strengths and get them done is another thing that we need to focus in on.”

The Demons were beaten by Greater Western Sydney when Lachie Whitfield was allowed to roam free, and had to contend with a draw against lowly Hawthorn after an Alastair Clarkson masterclass forced May and Lever into one-on-one battles, denying their rebound. Playmaking half-back Christian Salem also had his influence negated.

Then came the loss to the Western Bulldogs, a fellow premiership fancy, on Saturday night, when the Demons, as is their style, were content to allow their opponents to have more numbers at stoppages and the Dogs responded by booting 46 points from clearances, an issue Goodwin said there were “simple solutions” to resolve.

The Demons prefer to try and win the ball back with extra numbers behind the ball if beaten at the clearances – a Richmond trait.

Goodwin said he “understood the conversation” in terms of public comment on whether the Demons will succeed when the stakes are at their greatest in September but maintained full faith in his “method”.

The Demons are still one of the team’s to beat but there are issues, including inaccuracy in front of goal, for they are the worst across the league in this area over the last six weeks. Goal-kicking has been on the training agenda this week.

Forward-ruckman Luke Jackson has averaged only eight touches over his past three matches (one overall goal) but Goodwin defended the young tall, declaring he was typically not a “big possession getter” and his role could not solely be judged by statistics.

There remains an issue with marking talls Tom McDonald and Ben Brown. McDonald has been the mainstay but isn’t having enough of an impact aerially or in goals (two in the past fortnight and six over the past six weeks) while Brown has three goals in his three matches back. Sam Weideman was discarded but medium-sized Bayley Fritsch, with a team-high 37 goals, has been excellent.

“Clearly, our scoring is a topic of conversation. We would like to score more but we are generating shots,” Goodwin said, while giving the current forward set up another “week or so to build that cohesiveness required”. He added Christian Petracca (knee swelling) would be fit to play.

Buckley, now enjoying a break and tipped to join Fox Footy as a commentator, may have temporarily departed the scene but it could be argued he continues to shape the premiership race.