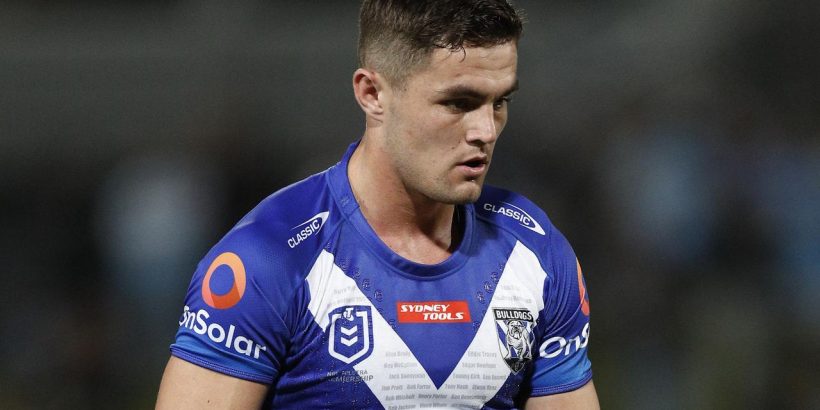 The Bulldogs are interested in Broncos No.7 Tyson Gamble, which could affect Kyle Flanagan’s future.

Meanwhile the Titans are yet to talk to off-contract star Tyrone Peachey about a deal for 2022 and beyond.

Read on for all the latest NRL Transfer Whispers.

NRL: Brisbane Broncos coach Kevin Walters is quizzed over the signing of Adam Reynolds and what it would mean for Anthony Milford going forward….

NRL: Brisbane Broncos coach Kevin Walters is quizzed over the signing of Adam Reynolds and what it would mean for Anthony Milford going forward.

BULLDOGS TARGET BRONCOS HALF AS PRESSURE MOUNTS ON FLANAGAN

Canterbury are set to make a play for off-contract Broncos No.7 Tyson Gamble in a move that will only intensify the pressure on Kyle Flanagan to establish himself as the club’s long-term halfback.

The Sydney Morning Herald reported the Gamble development as Souths’ skipper Adam Reynolds’ decision to join the Broncos in 2021 triggered a domino effect in the playmaker market that could have implications for several clubs.

The Sharks missed out on Reynolds’ services and their three current playmakers Shaun Johnson, Matt Moylan and Braydon Trindall are all off contract at the end of the season.

It is understood the Broncos want Gamble to stay, but the 24-year-old is set to be behind Reynolds and Kotoni Staggs in the playmaker pecking order at Red Hill next season.

The Storm have reportedly tabled an offer to try and lure Gamble to Melbourne as an understudy to Jahrome Hughes and Cameron Munster although his chances of regular game time there would depend on injuries to the star duo.

The Bulldogs’ plan was to partner Matt Burton with Flanagan in the halves next season, but after the former Sharks and Roosters No.7 was dropped by Trent Barrett his future is looking less secure, despite still having two and a half years to run on his deal.

Bulldogs playmakers Lachlan Lewis and Jeremy Marshall-King are off-contract at the end of the season and Barrett is keen to sure up his depth in the halves.

Brandon Smith pins his coach Craig Bellamy to the ground and humps him….

Brandon Smith pins his coach Craig Bellamy to the ground and humps him.

In form Gold Coast lock Tyrone Peachey has revealed he is yet to hear from the Titans about an NRL contract extension for 2022 and beyond.

Off-contract at the end of the season, Australian Associated Press reported Peachey is uncertain over his future after receiving no dialogue from the club over their plans for him beyond 2021.

The 29-year-old is in the midst of his best season since joining the Titans in 2019 after finally finding a home in the No.13 jersey.

The versatile Peachey has been chopped and changed between lock, centre, five-eighth and the bench his whole career, but has benefited from the stability of one position under Justin Holbrook in 2021.

Peachey is hoping his consistency as a ball-playing lock will give him some options in the player market after admitting he hadn’t heard from the Titans.

“Hopefully every team needs one, I’m off contract.

“The club haven’t talked to me yet so I’m not sure where I stand.

“I’m just going to try and concentrate on playing good footy and hopefully that sorts itself out.”

Peachey has scored 47 tries in 166 games for the Panthers and Titans since his debut in 2013 and played three games for the Blues in 2018.

Originally published asDogs target Broncos half as heat turns up on No.7, Titans silent on $1m star: Transfer Whispers