Jeremy Cameron did not get a bite when his fishing ban ended this week but he had Fremantle on the hook in a matter of minutes, though it took a forward in his debut season to land the catch for Greater Western Sydney.

The Dockers are nobody's idea of a whopper but, after the hub horrors the Giants have endured out west, they will take a win of any kind. 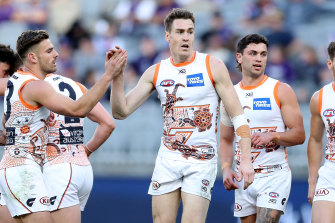 Jeremy Cameron celebrates after scoring a goal at Optus Stadium in Perth.Credit:Getty

However, it came at a cost with star midfielder Josh Kelly unable to play the second half after copping an accidental knee to the face from Shane Mumford nearing half-time.

Star forward Toby Greene is also likely to come under the scrutiny of the match review committee for an incident behind play in the final term in which he appeared to throw an elbow into the midriff of opponent Reece Conca.

The impact left Conca on his haunches gasping for air, though he was able to play out the game. 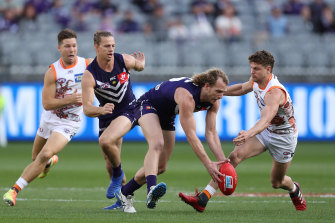 David Mundy contests for the ball.Credit:Getty

Cameron, the reigning Coleman medallist, was instrumental in the Giants' fast start but it was a man at the start of his career who finished off the Dockers.

With the game up for grabs in the third quarter, second-gamer Jake Riccardi imposed himself on the match in a manner worthy of a Josh Kennedy, Tom Hawkins or Jack Riewoldt.

It was not just the three goals last year's No.51 draft pick bagged but the vigour with which he launched at the contest.

The Giants have been crying out for a big forward who can hold up a pack – and Riccardi, who kicked two goals and held 10 marks on debut last week, is showing signs he could be that man.

This was clearly the Giants' best performance since the resumption of the season, and will give them confidence they can win three of the remaining four games and book a fifth straight finals berth.

Not only did they win every key statistical indicator, their stars recaptured some of their best form.

Cameron's return of four goals, which included two as he set the tone in the first term, is a season-high. Young midfield bulls Jacob Hopper and Tim Taranto were strong in the clinches, which allowed Stephen Coniglio to spend more time outside the contest.

The decision to clamp down on Nat Fyfe paid handsome dividends, with Matt de Boer limiting the dual Brownlow medallist to just 11 possessions.

The Dockers have been frugal in defence in Justin Longmuir's first season as coach but were repeatedly cut open by the Giants.

Their best period came early in the third term when David Mundy kicked two goals in a hurry to pull the Dockers within range but they lacked enough winners around the ground to sustain a meaningful challenge.