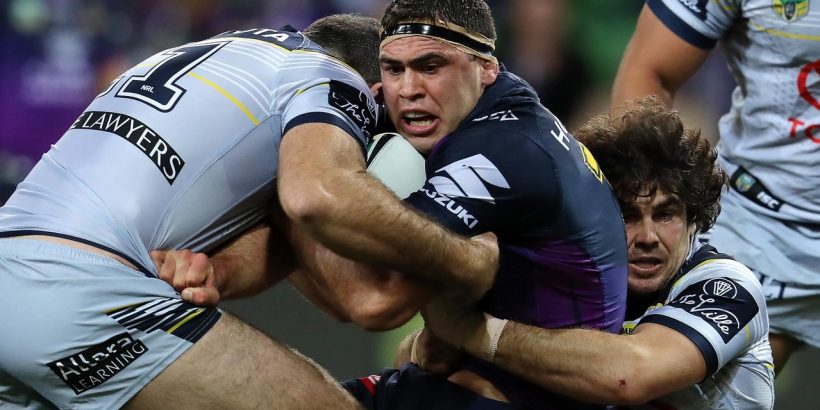 The cashed-up Cowboys are set to go after off-contract Storm pair Dale Finucane and Nicho Hynes as part of Todd Payten’s recruitment drive to turn around the NRL strugglers.

The Daily Telegraph reported the Cowboys have drawn up a hit-list of NRL free agents with the money from Michael Morgan’s retirement and Josh McGuire’s defection to the Dragons.

Finucane and Hynes are two of 12 Melbourne players that remain unsigned beyond the 2021 season.

NRL: Kevin Walters gave his Brisbane Broncos outfit one hell of a pre-match rev up before taking on the Penrith Panthers, by the looks of things….

NRL: Kevin Walters gave his Brisbane Broncos outfit one hell of a pre-match rev up before taking on the Penrith Panthers, by the looks of things.

LATE MAIL: All of ins, outs and team news ahead of Round 6

Finucane was made Storm co-captain this year, but is yet to play a game due to a calf injury suffered in the pre-season.

Finucane is reportedly seeking a four-year extension from the Storm, but at 29 Melbourne may be reluctant to grant such a long-term deal for a forward who has played 201 games in the middle for the Bulldogs and Storm.

Hynes is reportedly looking for a starting role in the NRL after serving essentially as a back-up to star fullback Ryan Papenhuyzen at Melbourne.

The 24-year old has made 13 appearances for the Storm since making his debut in 2019 and is in hot demand with a number of clubs looking to strengthen the fullback position.

‘YOU LET ME DOWN’: Joey reveals Tommy’s brutal reaction to ‘cattledog’ KO

‘ALLOWED TO CHANGE MY MIND?’: Kevvie lifts lid on Hunt after Broncos loss

However the Cowboys already have fullback Valentine Holmes on big money and it remains to be seen if he would want to shift to the wing.

The Cowboys have already been linked to Rabbitohs skipper and halfback Adam Reynolds, Broncos No.7 Tom Dearden and Tigers counterpart Luke Brooks as well as Bulldogs winger Jayden Okunbor.

Meanwhile McGuire’s departure gave the Cowboys the opportunity to secure 19-year old Riley Price, son of Queensland legend Steve, on a development contract for the rest of the season.

The promising forward is expected to be promoted to the NRL in 2022.

The Cowboys currently sit 12th on the NRL ladder with just one win in 2021 and are desperate to bolster their playing stocks to return to the finals in the coming seasons.