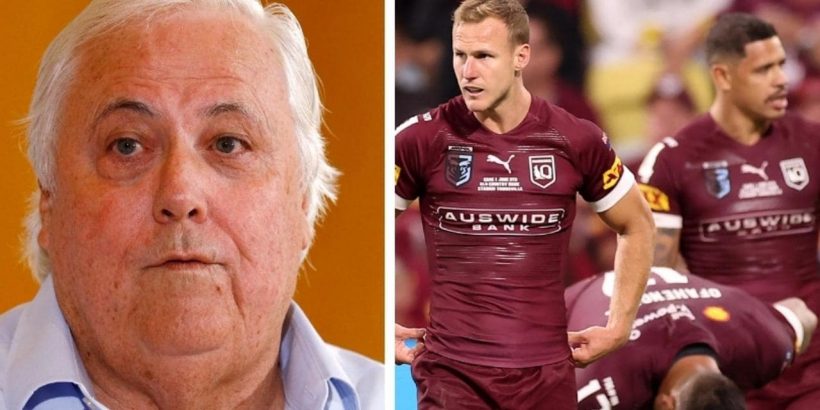 Australian politician Clive Palmer believes Queensland would not have suffered a 44-point defeat in the State of Origin series opener if Israel Folau had been selected.

Last month, Folau announced he was making a comeback to rugby league Down Under after signing with amateur club Southport Tigers in the Gold Coast’s A-Grade competition.

Palmer backed Folau’s move to Southport, but the deal still needs to be ratified by the QRL, who refused to register the 32-year-old due to contractual commitments with French club Catalans Dragons.

On Wednesday evening, the Maroons crumbled to an embarrassing 50-6 loss in Townsville, with the NSW Blues clinching a 1-0 lead in the three-game series.

And Palmer could not resist the opportunity to once again call for QRL to register Folau, claiming the former Origin star “would have made a difference”.

“Congratulations to NSW who were faster and stronger, however Israel would have made a difference. Queensland needed someone of his ability,” Palmer said in a statement.

“Everyone in Queensland now needs to write to the QRL to voice their disapproval.

“Never before have we seen a QRL condition put on a player where the player has to give up representative honours and selection.

“All Israel Folau wants to do is play football and be treated like any other person.

“Israel’s lawyers have clearly stated that he has not breached his contract with the Catalans Dragons and that it is Catalans who have in fact been in breach.”

Another instalment in the Israel Folau saga. How about this from Clive. Queensland need Issy….. thoughts? pic.twitter.com/scZNG2M6cC

When noises were being made about a potential return to the NRL, Catalans said they expected Folau back with them this season.

Catalans football manager Alex Chan said he was “shocked” by recent developments: “We still hold his contract, he’s still a registered player with Catalans Dragons. It was a big shock to see what was put out there.”

Folau’s contract with Rugby Australia was torn up in 2019 for homophobic posts made on social media, and it was earlier reported the QRL wants a written guarantee he will not publicly express his views on homosexuality — which include the belief gay people will go to hell unless they repent for their sins.

In a statement, the QRL said: “The QRL acknowledge that previous social media comments made by Folau, whilst not a registered participant in rugby league at the time, do not align to the beliefs of the game, or the QRL.

“The QRL is an inclusive organisation with a proud diversity and inclusion framework.”