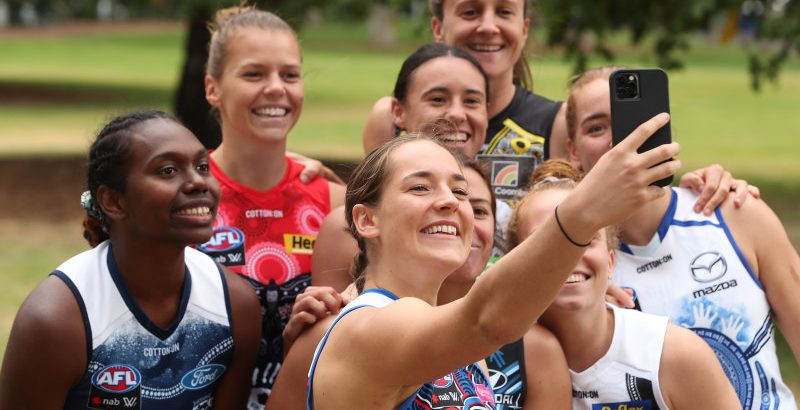 Facebook has banned the sharing or viewing of our news articles on its platform. For independent journalism straight from the source, download our app and sign up to our newsletters.

The AFL, players and the players’ association remain in delicate talks about how to complete the AFLW season amid a reluctance from some players to head interstate for an extended period.

As the home and away season reaches its halfway point, the league is running out of match pairings before either needing to replicate match-ups from earlier in the season or send more clubs interstate for several weeks in order to ensure the nine-round campaign can be fulfilled as planned. 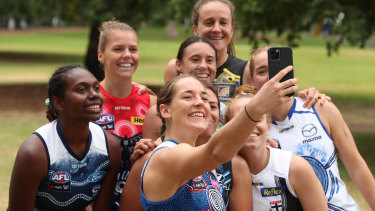 Isabel Huntington of the Bulldogs takes a selfie during the AFLW Indigenous Round Media Opportunity on Tuesday.Credit:Getty

Needing to remain ultra-flexible, the AFL has been releasing its women’s league fixture on a week by week basis.

Victorians must still enter quarantine when arriving in Western Australia, with neither the Dockers nor the Eagles having yet played a Victorian team.

By the completion of this weekend’s round five, they will have both played the full allotment of other non-Victorian teams, meaning that unless the border situation was to change, either WA or Victorian clubs would need to relocate to interstate hubs in order to avoid fixture double-ups.

Players – all of whom are semi-professional and many of whom hold other jobs – were surveyed by the AFL Players’ Association as to whether they would be prepared to head interstate for several weeks to finish the season. The AFLPA was unwilling to reveal specifics of the survey’s results but multiple women’s football sources have indicated that a majority of players – but not all – would be willing to enter hubs rather than risk further diluting the integrity of a competition in which clubs already don’t play all others during a season.

The question however remains as to which clubs will need to relocate. North Melbourne and St Kilda were floated by industry insiders on Tuesday as frontrunners to move but the league is adamant no decisions have yet been reached. Meetings between key stakeholders continued on Tuesday.

While overwhelmingly keen to complete the season, sources suggest some players have shown a reluctance to relocate, understandable given many have significant commitments outside football. The needs of club staffers are also being taken into account.

Greater Western Sydney already spent a lengthy stretch during January away from Sydney because of the coronavirus situation in NSW at the time while Adelaide were whisked into Sydney ahead of round two after players initially needed to isolate having spent time in WA when that state had a positive case in late January. 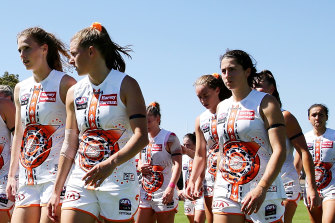 The Giants were whisked straight to the airport after their match against Fremantle.Credit:Getty

Gold Coast, meanwhile, are spending the week in WA in between matches against both Fremantle and West Coast.

The AFL provided financial assistance for Giants players who spent an extended time on the road and a similar scheme would be likely for any Victorian clubs who need to relocate.

The AFL is steadfast in its determination to ensure the season is completed with a premiership awarded unlike 2020 in which the competition was called off in late March with four sides left standing and no team crowned as premiers.

Meanwhile, Carlton announced on Tuesday that they would challenge the one-match ban handed to reigning league best and fairest winner Madison Prespakis for rough conduct. Prespakis was on Monday offered the suspension for a dangerous tackle on Richmond’s Sarah Hosking which was graded as careless, medium impact and high contact.

But the Blues will contest the ban at the tribunal on Wednesday night in a bid to free the gun midfielder for this weekend’s meeting with North Melbourne in Launceston and ensure she remains eligible for a second straight AFLW best and fairest gong. That game in Tasmania forms part of the inaugural AFLW Indigenous round, which was launched on Tuesday. The AFL announced that Aboriginal Elder Aunty Joy Murphy would be honoured throughout the round.

“The inaugural AFLW Indigenous Round will draw on stories of empowerment, strength, resilience, and determination and will showcase the journey of Aboriginal and / or Torres Strait Islander women on and off the football field,” AFL women’s chief Nicole Livingstone said.

“Aboriginal and / or Torres Strait Islander women have played a significant role in the development of our sport for many years, so we’re delighted that we’re able to recognise their contribution to our game in the first dedicated round this weekend.