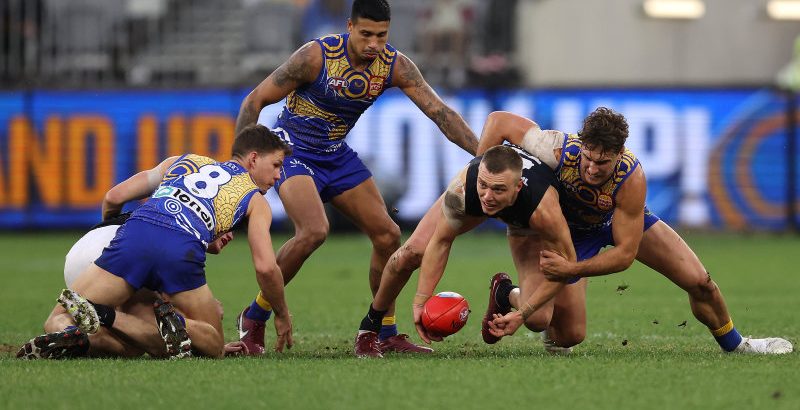 The Blues led 34-0 at quarter-time of Sunday’s AFL clash but West Coast hit back with a seven-goal blitz in the second term to claw the margin back to 10 points by half-time. 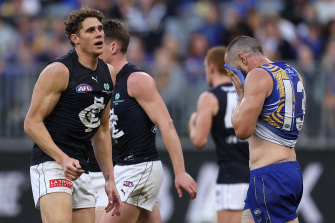 Charlie Curnow was instrumental in Carlton’s win over the Eagles.Credit:Getty Images

Curnow had three goals in the first half, but it was his two goals in the third quarter that proved decisive.

The 25-year-old’s set-shot snap from the pocket helped edge the momentum back Carlton’s way, and he popped up late in the third term with a clutch pack mark and 50-metre set shot to give the Blues a 17-point lead at the final break.

Curnow finished with 5.3 and eight marks from 16 disposals, while McKay kicked 5.3 to go with his seven marks. 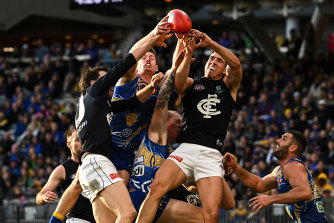 The win lifted Carlton (11-5) to fifth spot, just percentage adrift of the fourth-placed Brisbane Lions ahead of Saturday night’s blockbuster against ladder leaders Geelong at the MCG.

Andrew Gaff racked up 30 disposals and six clearances for the Eagles, while Shannon Hurn was a rock in a besieged defence.

The inside-50 count read 17-0 in favour of Carlton before West Coast finally made it into attack at the 18-minute mark of the opening term.

Curnow feasted on West Coast’s ineptitude to boot two goals in the opening quarter, while McKay, Sam Durdin, and Zac Fisher also got in on the act as Carlton entered quarter-time leading 5.4 (34) to 0.0 (0).

Carlton struggled to cope with the unexpected lift in tempo, with skipper Patrick Cripps banging the turf in frustration after being caught holding the ball with the goalposts in sight.

But from there it was one-way traffic, with Carlton booting the next eight goals on the back of Cripps starring in the midfield to run away with the win.