Patrick Dangerfield has been re-appointed as president of the AFL players' union, as three new faces join the Geelong midfielder on the newly-minted board.

Sam Docherty, Daisy Pearce and Scott Pendlebury stepped down from the board, to be replaced by Ed Curnow, Meg Downie and Jamie Macmillan. 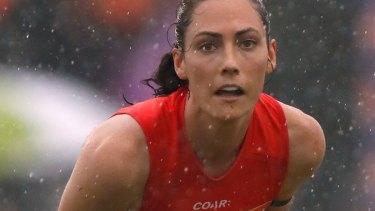 Speaking at the players' union season launch, Marsh said the three players exiting the board were doing so for differing reasons.

Docherty has taken on a co-captaincy role at Carlton, Pearce recently gave birth to twins, and Pendlebury has assumed "increasing responsibilities at Collingwood", according to Marsh.

Dangerfield will lead the players' union for a second consecutive year, after taking over from long-time president Matthew Pavlich last year.

Carlton's Curnow and North Melbourne's Macmillan have been union delegates for several years, while Downie – of Melbourne's AFLW team – will become the sole female on the eleven-person board.

Macmillan said he was excited to "make the game as good as it can be", but said he would leave decisions such as a potential twilight grand final to those "in the know" at AFL head office.

"Whatever [the AFL] think, I'm happy to run with that," he said.

Curnow noted the significant players' association achievement of securing of a share of broadcast revenue in 2017.

The board shake-up comes as the players' union revealed a balanced set of finances, recording a break-even financial year in 2017-18.

The union – which advocates on behalf of the playing fraternity – recorded income of more than $7 million, and asset holdings of more than $6 million.

Marsh reiterated his position on the AFL illicit drugs policy, which has been the subject of derision from some ex-players in the last fortnight, who say the policy allows players to escape punishment for drug-use by taking advantage of mental health provisions.

"It's always been a welfare policy … its a voluntary policy … these players don't have to agree to it," said Marsh.

Marsh said it was up to the AFL to decide whether they publicly frame the drugs code as one that is focused on punitive action against drug-takers, or one centred on welfare concerns.

"It's not my job to talk to the AFL about what their options are on these types of issues … how the PR works around it is less important."