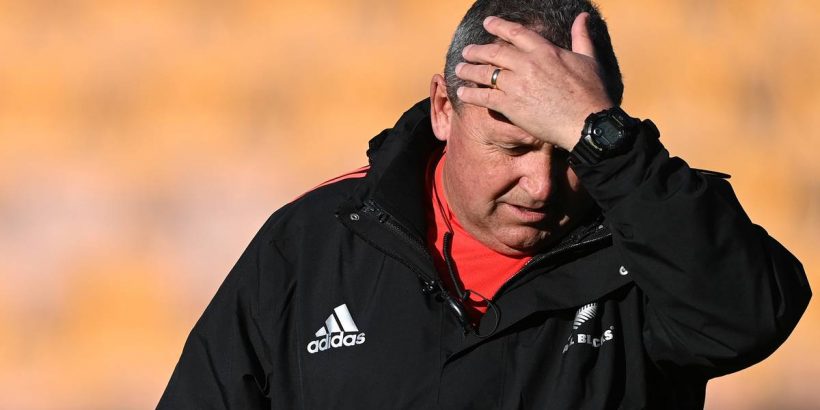 A layer of intrigue has been introduced to the All Blacks season by the re-signing of Scott Robertson, and it’s added extra spice to a pivotal year for the All Black incumbent coach, Ian Foster.

The timing of the announcement has added pressure to Foster as he embarks on his second year as All Blacks head coach. The shadow of Razor, already cast over Fozzie, has just become darker.

The weekend Robertson chose to state his staked claim to the top job, Foster’s team put in a meek showing against a physically dominant Fijian side.

Performances like that, albeit typical of rust ridden, combination-free early season games, add just a little more strength to the arms of those who wish to push Foster off his perch.

Last week, Sir Stephen Hansen told me in no uncertain terms that the NZR should give Foster the coaches job now until the World Cup, and that they were stupid for not doing so. Far be it for me to argue with arguably the best coach the All Blacks have had, but I have to.

New Zealand Rugby, the fans and I’m sure the coaching staff need to know how Foster and his staff operate under intense pressure. The breath of Razor, at nape level, with an increasingly irritable mob of fans expecting one-sided hammerings, will provide exactly that.

The ability of Foster to pick through the remains of an average 2020 season and rebuild a once mighty team in his own image is a huge task. Passing judgement on a coach based on how they managed to navigate a covid wrecked season is grossly unfair.

What is also unfair is giving Foster two more seasons to cement his position as the man to lead the All Blacks to success in 2023. It’s unfair on the newcomer if the incumbent stumbles, as the new man has only a year to rebuild. So Foster has this season only to prove that he is the one. Not just a successful deputy, the reason he was given the role, but a sheriff in his own right.

We’ll learn nothing if Foster is given the role now. The Barbarians at the gate won’t be taunting him, his comfort zone will expand which won’t satiate our need to know his role is earned, not gifted. The intense scrutiny that Sir Graham Henry was subjected to after the unpopular reprise of a role he’d surely conceded after World Cup failure, prepped him and his side for the all encompassing weight that bore down upon them for a World Cup at home.

To hand the role to Foster now would also highlight the perception that NZR are operating a jobs-for-the-boys club.

The increasing calls from the old school to support Foster and leave the ‘Razor is coming’ narrative behind is admirable but fanciful. We are all behind the All Blacks, we all want them to reclaim their spot at the summit of world rugby and we don’t care who the coach is, as long as they bring dominance and success with them.

Public discourse brings attention, discussion and exposure, which looking at the lack lustre crowd numbers of the first two tests, the team desperately needs. I’d guess, taking into account what I know of Ian Foster, that external noise won’t put him off his stride in the slightest. A coach worth his salt shouldn’tentertain external pollution. If he does, and it affects him deeply, surely that’s reason to relieve him of his duties.

I don’t think it will. I think he’ll rise to the challenge.For the sake of All Black health, it needs to be seen as one.