In what should not be mistaken for a game in 2018, Jordan De Goey and Mason Cox led Collingwood to a crucial win over the Gold Coast Suns on Monday night.

The win means the Pies will play finals for the third consecutive season, even if they lose next week against ladder-leaders Port Adelaide at the Gabba. 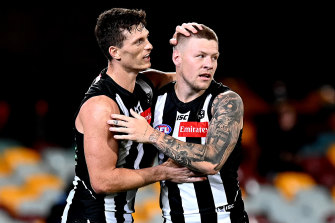 Jordan De Goey (right) was a welcome return for the Pies.Credit:Getty Images

Cox and De Goey were often so important and dangerous in Collingwood's run to a narrow grand final loss two years ago, but since then either one or both has mostly been injured or out of form, and therefore the Magpies' forward line has looked meek.

But on Monday night they both produced moments of brilliance and genuine match-winning plays, particularly so De Goey, to drive the Pies over the line against the dogged Suns.

Any doubt about De Goey's importance to Collingwood was put to bed on Monday. Playing his first game since round seven, he kicked four goals, handed another off and missed a couple more in a dominant and transformative display. 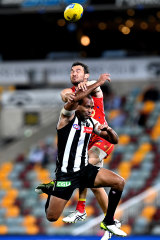 Collingwood’s Travis Varcoe is spoiled by Jarrod Harbrow of the Suns.Credit:Getty Images

At one point, as his side retreated out of their forward 50 to keep possession under Gold Coast's pressure, De Goey effectively said "stuff this" and decided to gather the ball and kick it forward off two steps. It sailed through the goals from 50 metres out.

The 24-year-old has the chutzpah and the ability to do such a thing – that is take a risk when other players justifiably might not have.

Cox wasn't beaten in a marking contest, gave good relief to Brodie Grundy in the ruck and kicked two fantastic goals. The first was a set shot from the boundary after an 'Inspector Gadget' extended-arm mark, the second after taking a confident bounce and kicking a goal on the run.

Adam Treloar's return was also important. He hadn't played since round 10 and his ability to break lines in the midfield and then penetrate with long, deep kicks took pressure off his fellow midfielders.

The Pies' patchy and unconvincing form through the middle of the season is much easier to excuse when you watch them with Treloar and De Goey in the side.

As ever the defensive trio of Darcy Moore, Brayden Maynard and Jack Crisp were excellent in the face of repeated attacks. Maynard had two horror short kick-ins that led to two Suns goals but he made up for it with his long kicking and hard attack on the ball. 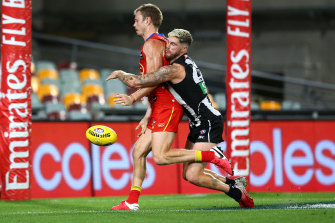 So great was their dominance in this area that Scott Pendlebury – who simultaneously equalled the record for games played for Collingwood (313) and games captaining the side (161) on Monday night – had no touches in the opening term.

Gold Coast used their clearance dominance to move the ball quickly and it played into the hands of the dangerous Alex Sexton, who gave poor Isaac Quaynor a tough night. 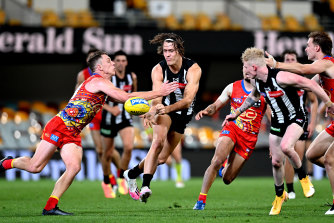 He kicked three goals in the first term but the Pies rallied when trailing by 13 points. They were patient, kicking backwards and switching the ball until the right option opened up and cut the margin to five points at quarter-time, then took a one-goal lead into the main break.

Collingwood clawed back the clearance deficit, Gold Coast's pressure dropped and Collingwood began moving the ball much too easily in the second term.

From there, on a dewy night, the Pies were able to get enough periods of clean ball use to take the win and punch their finals ticket.