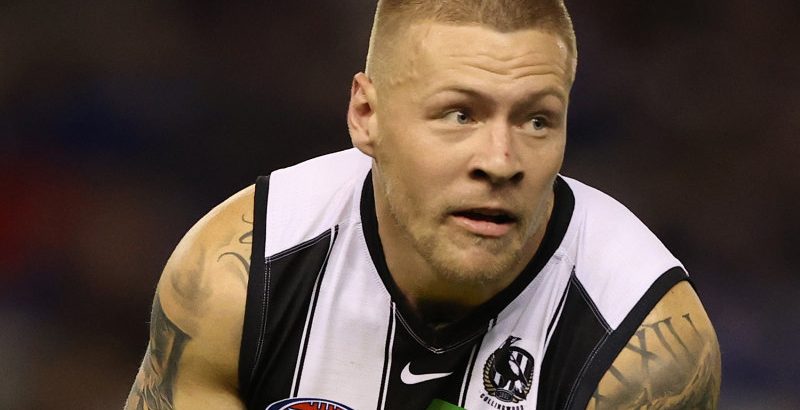 The AFL’s hard-line stance on head-high contact has continued with Collingwood star Jordan De Goey set to miss the Magpies’ clash against Fremantle after he copped a one-match ban for his bump on Melbourne’s Clayton Oliver.

De Goey ran past the ball in the final quarter of the Queen’s Birthday clash and made high contact with Oliver, who left the ground after the incident, with the MRO grading the impact as medium and handing the star Magpie a one-match ban after the club’s bye this week unless they appeal.

The AFL judiciary already have a big week looming after the MRO’s decision to send Adelaide’s David Mackay straight to the tribunal for a bump on St Kilda’s Hunter Clark that was originally ungraded.

It later came to the light that AFL football operations boss Steve Hocking had made the decision to send the Adelaide veteran to the tribunal after determining the Crow carelessly engaged in rough conduct that was “unreasonable in the circumstances” with a direct referral carrying a minimum penalty of three weeks if a player is found guilty.

Adelaide director Mark Ricciuto said on breakfast radio the decision would alter the way the game was played if Mackay was found guilty as he argued Mackay was contesting the ball. It remains unclear what defence the Crows plan to present at Thursday’s hearing.

This came as Carlton great Ken Hunter urged players to reprogram the way they attack an opponent and understand there will be consequences if they don’t in the wake of the sickening collision that left St Kilda’s Clark with a broken jaw.

Hunter, who had an estimated 20 or so serious head knocks, including three broken jaws, and has raised the long-term impacts of concussion and mental health, said a split second was long enough for a player to determine whether he or she attacked a contest with the ferocity which could injure an opponent.

Mackay and Hunter collided when they attacked a loose ball in Saturday night’s clash in Cairns, and there has been much debate in the football world over whether Mackay should have turned his body into Clark at the point of contact. The case is shaping as a test case for future head-high incidents.

“It is a tough one but I think if the players were aware of what the consequences mean in today’s world, they are more than capable of adjusting,” Hunter said on Tuesday.

“They are resilient and they can adapt to the rules within the game.

“The fact is, Hunter Clark, obviously, got hit in the head, which is sacrilege now. You can’t do that. As a consequence of that, he has a broken jaw, and is going to be out for six to eight weeks, I would imagine. He has probably copped the rough end of a reckless action in some respects.

“I don’t mean that in any way to judge young Mackay because he is playing within the rules of the game.”

Clark has had surgery to repair the multiple fractures, and has also required intervention to ease a separate full break from the back of his teeth to the upper jaw.

Hunter, a three-time premiership player and a former Blues’ board member, said players needed to understand the consequences of their actions.

“As a player if you decide to go hard at the footy, you have to consider there are going to be consequences with that. If you are prepared to take that, and it comes off, and the game goes on, well and good,” he said.

“But if a consequence is what happens to Hunter Clark, and he has a broken jaw, you should also accept there are going to be consequences for that as well. Whilst it is a split second decision, I would think then that is a time to say: ‘Yes or no, do I go hard at this or not? If I do, there could be a consequence of what I am about to do’.”

A policy to to prevent head knocks as much as possible was shown on the weekend through a crackdown on potentially dangerous sling tackles. Collingwood pair Brayden Maynard and Jack Crisp and Richmond’s Marlion Pickett were all penalised.

Concussion campaigner Peter Jess said coaches must instruct players it is no longer acceptable to use their body as a weapon when crashing into an opponent.

“Clubs must know that it (on the field) is a workplace,” Jess said.

“For an injury of this severity means that the workplace is unsafe. We are fighting for the long-term survival of the sport. Players cannot weaponise their body. We must have zero tolerance for this.”

Bond University sport law expert Dr Annette Greenhow said sensitivities about head injury in all sports had grown to the point where it was now a public health issue. “There’s a strong argument for a collaborative approach, rather than leaving it just to the sports themselves,” Dr Greenhow said.

“Going across the board, drawing from the resources of the sports themselves, and the capacity of our governments. I’m not talking about governments controlling this, not at all. I’m just saying we can get the best of both worlds.”

Dr Greenhow made a comparison with other spheres in which it was common to identify “best practice” and ask everyone to conform.

She drew attention to developments overseas. In Canada, Federal and provincial governments were working collaboratively with hockey and rugby to tackle head injuries. In the UK, a parliamentary inquiry into concussion in sport has just concluded.

“Governments are getting interested in this topic because they see it as falling within their remit as guardians of public health.” Dr Greenhow said. “It’s not to take away control, but it is in the public interest.” She said the long-term cost to society was high.

Dr Greenhow said she thought the AFL was taking seriously a difficult issue. “We have to make sure our kids are coming through a system that’s optimally safe, bearing in mind that contact happens in contact sports,” she said. “You can’t make rules that are going to eradicate all of that contact without changing the essence of the game. It’s a really complex issue.”