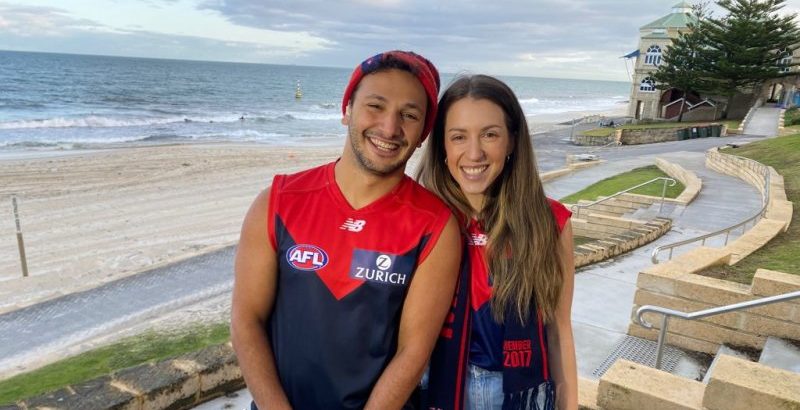 As the wins stacked up for Melbourne this season, diehard supporter Phillip de Winter started to plan how he could attend the AFL grand final in Perth.

De Winter and wife Chloe had left Melbourne for the Gold Coast before the winter lockdowns kicked in and decided to remain there. 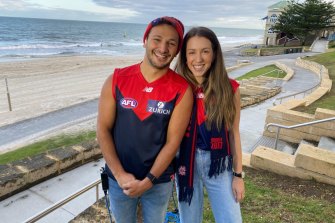 Phillip de Winter and wife Chloe are heading to the AFL grand final in Perth.

But they couldn’t travel directly to Perth from Queensland due to travel restrictions between the states.

So he hatched a plan to head to Darwin 15 days beforehand and then fly into Perth in time for the grand final.

He nervously made the bookings after the Demons beat Brisbane in the qualifying final, with the couple watching the preliminary final win over Geelong from Darwin and finishing out their time in the NT before flying into Perth this week.

“I started working on my wife before the finals as I had a bit of a feeling,” de Winter said.

“Queensland’s border is open with the Northern Territory so we had two weeks of freedom in Darwin, we didn’t have to hotel quarantine or anything like that.

“We had two options to get into Perth, we could either go to the Northern Territory or Tasmania and the NT was closer and warmer.

“I’ve been following the Dees for over 30 years and we’ve never had a better chance than this. The way they played against Geelong [in the preliminary final] was the best I’ve ever seen them play, and to be able to say that at this time of the year is pretty awesome.”

De Winter is excited to see his club in a grand final after decades of watching games in person or watching live at 3am while living in New York and London, and he’s equally excited to do so with his wife, who is a St Kilda supporter turned Demon for the day. 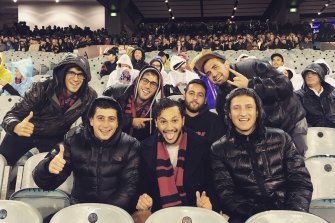 Phillip de Winter, middle front row, pictured with his mates at the MCG.

But he is also feeling sad about the thousands of Victorian-based fans who had no chance of attending the game – including his father and his best mates, who normally attend every game.

“I can’t say how much I wish I was here with my mates, with my dad, my brother and my cousin who are all Dees supporters,” de Winter said.

“I know they will be back home cheering hard but I wish they were here.”

De Winter attended the Demons’ open training session at Optus Stadium on Friday and admits it brought back some tough memories as he was living in New York in 2018 and flew to Perth to meet his dad and watch the Demons in their preliminary final loss against West Coast.

“I flew back and they lost by 80 points so that was an awful experience,” he said.

“This time around it was just training but I had a few memories flood back.