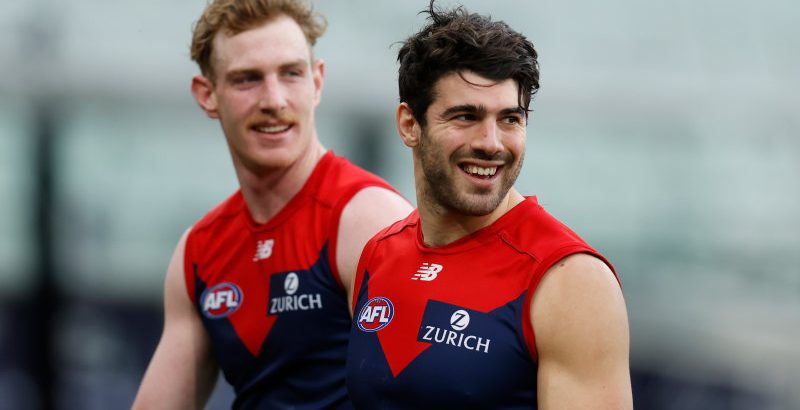 Melbourne coach Simon Goodwin has downplayed the lure of winning the minor premiership but says the advantages that come with finishing as high as possible on the ladder are “not lost on us”.

The ladder-leading Demons will be in a battle for the minor premiership – which would be the club’s first since 1964 – when they meet second-placed Geelong in a round 23 blockbuster at GMHBA Stadium on Saturday night. While Melbourne won’t be able to play in front of their fans, at least early in the finals, a higher-placed finish does have rewards.

Victorian or NSW-based AFL clubs that win the right to host an elimination or qualifying final will be able to choose where they play the match, providing a crowd of some size can attend.

Goodwin said his team, bolstered by the almost certain return of Steven May, Tom McDonald and Jack Viney, was acutely aware of the positives that will come from a second win over Geelong this season.

“I think it’s pretty clear from the AFL’s perspective, and also in club-land, that the higher you finish on the ladder the more choice you’ve got of where you play, and the opportunities you get within that finals series,” said Goodwin. 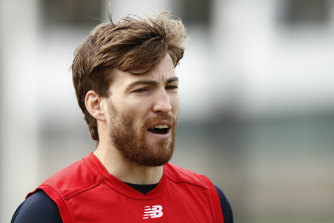 Jack Viney is in line to return for the last game of the home-and-away season.Credit:Getty Images

“That’s not lost on us at all – whether it’s at home [where we play] or somewhere else in Australia, we’re not sure – but we’ll be ready.”

Should the Demons beat Geelong at the Cattery and retain top spot, they will face a tricky choice about their qualifying final venue as they would need to determine where they had the best chance of winning based on their opponent and the suitability of the venue for their playing style. Melbourne’s metropolitan venues the MCG and Marvel Stadium are already ruled out.

Asked about the carrot of Melbourne claiming the minor premiership for the first time since their most recent premiership season in 1964, Goodwin said they were focused on the bigger rewards on offer.

“I think building a winning culture, and a winning mindset means a lot to me – if that means that we end up winning the minor premiership I think it’s an outstanding achievement for our football club,” said Goodwin, coaching the Demons for a fifth season.

“We want to be a football club that continues to build that mindset and culture around winning. Ultimately, if we do happen to win the minor premiership I think it would be a great result and a great reward for all football club.

“But it’s a small thing in the scheme of things. We’ve got bigger things that we want to achieve.” 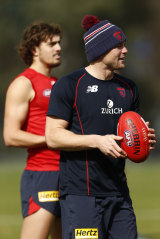 Steven May (right) is also set to return.Credit:Getty Images

Regardless, Goodwin backed the AFL’s decision to remove the pre-finals bye.

“We’re obviously playing a quality side in Geelong who’s played some outstanding footy for a number of years, so we get a really good chance to have a look and where we sit, how our game is. After that we know that we’re going to be stepping straight into finals. So it’s a big opportunity this week for us a footy club to build that momentum.”

Melbourne beat Geelong by 25 points in round four as their new-found resolve started to emerge. It was also the early stages of a formidable nine-match winning streak that set up their season. But the Cats that day were without star forward Jeremy Cameron, Patrick Dangerfield and Gary Rohan. The Demons lost May early in the match.

“We won’t be hiding anything, we won’t be resting players unless they’re sore,” said Goodwin.

“We’re going to go out there and try and play our best footy.”

“I think a lot of things have changed, that was a long time ago.

“There’s some difference in how we structure up. We’ll look into all those things, and it will be a different game this week.”

Goodwin said May, Viney and McDonald were poised to play, but all needed to get through the club’s main training session.

“I’m still really confident with those guys playing. They both trained fully the other day [and] we’ve got a main session to get through today but both Steve, Tom and Jack Viney will be available.

“They’ll all come into the team.”