Bradley Hill has revealed the words of encouragement he received from St Kilda great Nicky Winmar after the Saints wingman was criticised for being out of form and overpaid.

Hill returned to form with a 27-disposal showing in his side’s thumping win over Hawthorn at Marvel Stadium on Saturday.

He had been a lightning rod for criticism early in the season after a run of quiet performances, coupled with St Kilda’s slow start to the campaign. 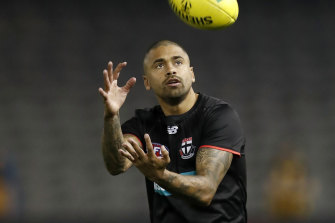 Brad Hill enjoyed a return to form in the Saints’ win on Saturday.Credit:Getty Images

Speaking to The Age after the win over the Hawks, Hill acknowledged that he had allowed the criticism to get to him early in the season.

Former Port Adelaide star Kane Cornes had been among those who took aim at Hill.

“His performances have been well below what he should be producing for a player that is earning massive money,” Cornes said last month.

“Six years, $900,000 deal with St Kilda. Didn’t finish in the top 10 of their best and fairest last year for the Saints, despite playing every game. He should be doing that.“

Coach Brett Ratten said some of the criticism of Hill, who headlined the Saints’ recruiting spree during the 2019 trade period, had been unfair.

During the Saints’ extended break between games in round five and six, Hill headed back to Western Australia to see family he hadn’t seen in 18 months, as well as meeting two young nieces for the first time.

He revealed he had received valuable support from Winmar, who had been at Moorabbin during the week as part of the club’s preparations for Indigenous round. 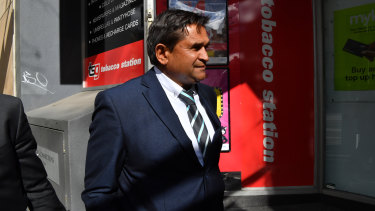 “I had a little bit of a chat to him … he pretty much said ‘just don’t listen to that, brother, we know what you can do, back yourself in,’” Hill said.

“Probably early on I was letting the external noise get to me. And then I pretty much don’t even look at anything like that, shut that out. No point in listening to the noise outside.

“Sometimes in your career you have some rough patches and I’ve had a rough patch over the last weeks. Hopefully I can build on tonight.”

He added that his loved ones had also been hurt by some of the vitriol directed towards him.

“[My family] were probably reading into it a little bit and obviously it’s going to hurt anyone if they see their family members, people saying stuff about them. But I just said ‘don’t worry, we don’t know ’em.’ You’ve just got to worry about the people who care about you.”

Ratten was pleased with Hill’s defensive efforts as much as his offensive drive, with Hill acknowledging that had stemmed from a change in thinking.

“I had a different mindset, just bringing that effort and intensity, and that then helped with my offensive stuff, so if I bring that effort, everything else will come together,” Hill said.

“To be honest, nothing even really happened. It was just more our body language. We weren’t even arguing, we were just sort of talking about which way we should have ran and trying to communicate.”

He was also optimistic that an Achilles issue which plagued him in the round six loss to Port Adelaide was a thing of the past.