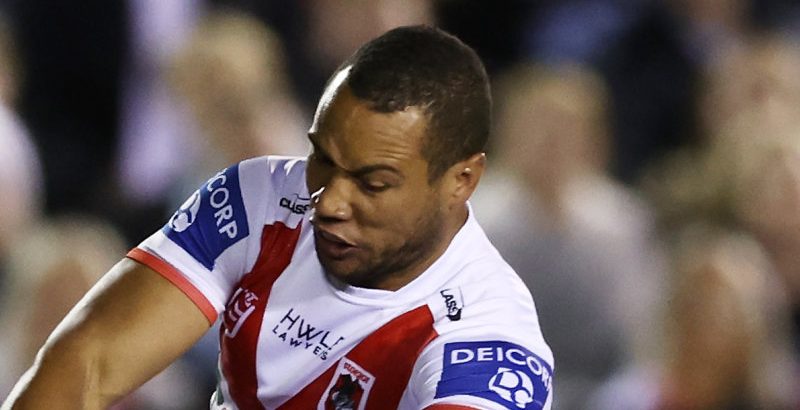 Tariq Sims may have played his last game for St George Illawarra as he prepares to be hit with a lengthy ban for flattening Cronulla’s Connor Tracey on Sunday night.

The spirited Dragons lost 24-18 to their neighbours. The defeat ended their NRL finals hopes and also potentially brought a premature end to Sims’ seven-year career at the Red V.

The representative forward knew he was in trouble when he caught Tracey with his right bicep in the 12th minute.

Tracey was out cold before he hit the deck at PointsBet Stadium and required half a dozen trainers to carry him off on a stretcher but was in good spirits in the sheds before half-time.

Sims was given ten minutes in the sin-bin and made a point of checking on Tracey as he was being taken from the field.

Sims had never been sin-binned in his 12 seasons in the top flight but has now been marched three times in four weeks.

Because he already has two offences next to his name, any punishment handed down by the match review committee will attract a heftier suspension. A grade-two careless high tackle will see him miss three games with a plea, while a grade-three careless high tackle charge is four matches.

Set to join Melbourne next season, Sims did not want to leave his childhood club and is now almost certain to be denied an on-field farewell.

Like Manly, the Dragons will finish the weekend four points adrift of the top eight. They face Canberra away, the Titans, Tigers and Broncos in the final round. 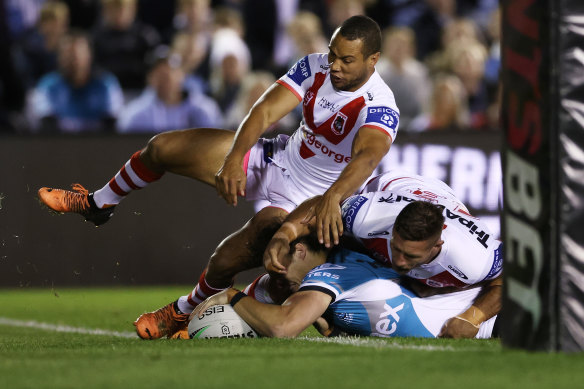 Zac Lomax converted a penalty goal with three minutes on the clock to reduce the margin to six in the hope they could score a converted try and take the match to golden point.

The Dragons had a chance to hit back before half-time when Sharks rake Blayke Brailey was binned for being too slow to get off his No. 9 opposite Andrew McCullough.

But the Sharks were excellent in defence and were awarded a penalty when Jack Bird clipped debutant Kade Dykes high.

Nicho Hynes went over in the third minute, but Jack de Belin hit back for the visitors when Ronaldo Mulitalo failed to catch a Ben Hunt kick.

Both sides lost their way when Tracey was taken from the field and Sims was given a breather, but Cronulla soon got into a groove and pulled ahead through Braydon Trindall, who was only given the nod when Matt Moylan pulled up sore in the quad muscle after Friday’s captain’s run.

Cronulla are certainties to nail down a top-four spot. It is a big achievement for first-year coach Craig Fitzgibbon. His roster is in pretty good shape and there are no shortage of players at feeder club Newtown banging down the door for an NRL call-up.

Kade Dykes, a third-generation Cronulla player whose father Adam and grandfather John both wore the Sharks colours, almost had a try on debut when he supported Mulitalo after he had made a break through the middle, but the final pass went behind him.

Inspirational forward Dale Finucane will return from a two-match ban for next weekend’s clash against the Tigers in Tamworth.