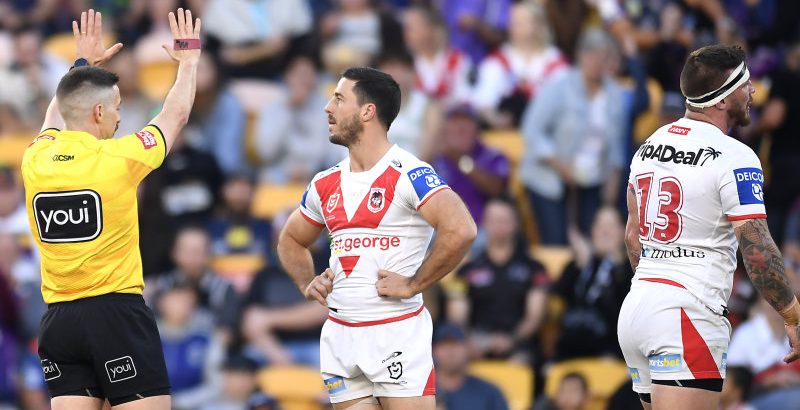 Four St George Illawarra players face a combined 18 games on the sidelines through suspension after the NRL match review committee issued a charge sheet with the potential to unravel the Dragons’ finals assault.

Mid-season recruit Josh McGuire faces the longest penalty for a hip-drop tackle on Storm flyer Josh Addo-Carr, which could sideline him for seven matches if he chooses to fight the grade three dangerous contact at the judiciary and loses. He can accept five matches with an early guilty plea.

McGuire’s base charge was for a potential three-game ban but loading from a handful of previous offences, and carry-over points, added another potential four games.

Tyrell Fuimaono, who was sent off for a high shot which heavily concussed Melbourne fullback Ryan Papenhuyzen, faces a six-game ban after he was hit with the unusual grade one reckless high tackle charge. Like McGuire, he will miss only five matches with an early guilty plea.

Winger Mikaele Ravalawa, who scored a hat-trick in the 44-18 loss at Suncorp Stadium, was hit with another penalty for a shoulder charge in his first game back from a suspension for the same offence. He will miss two matches with an early guilty plea or three if he can’t secure a not guilty verdict or downgrade at the judiciary.

And the pain didn’t end there with Tariq Sims facing a one-match suspension for an early guilty plea after a dangerous contact charge stemming from a tackle on Tyson Smoothy. It carries a two-game ban of he loses at the judiciary.

McGuire also faces a $2600 fine for a high tackle on Justin Olam which prompted him to be sent to the sin bin only minutes before Fuimaono’s dismissal.

Gold Coast forwards Herman Ese’ese and Tyrone Peachey are also facing suspensions from a wild loss to the unbeaten Panthers, the former sent off for a high tackle on Brian To’o. Ese’ese can accept a two-match ban for a grade three careless high tackle while Peachey has been offered two matches for a crusher tackle on Liam Martin.