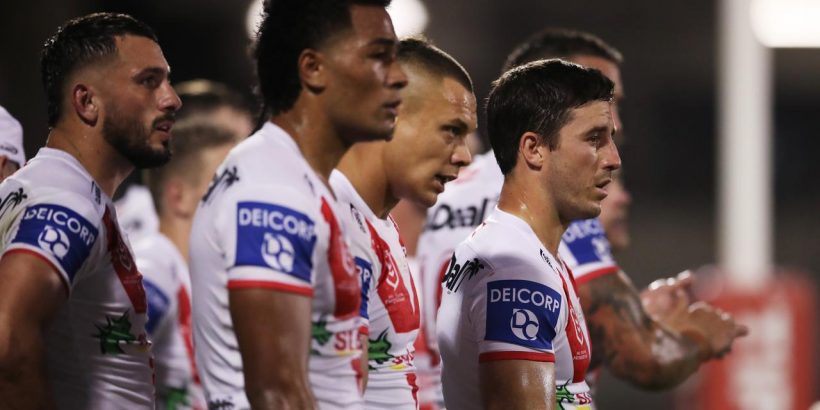 For the St George Illawarra Dragons, it’s been nothing short of a hellish few weeks in the wake of a BBQ hosted by disgraced prop Paul Vaughan.

The event was a direct breach of the NRL’s biosecurity rules as well as NSW’s stay at home orders, as the state grapples with a major Covid outbreak.

Vaughan was sacked by the Dragons and slapped with a $50,000 fine and an eight-game suspension as punishment for his role in hosting the BBQ.

However, for the other players in attendance at Vaughan’s house, they could count themselves relatively lucky. They only copped a one-game suspension along with a range of fines dependent on the respective player’s salary.

After Vaughan became the first of the group to break his silence, the others have now followed suit, with a number of the players recording their apologies in a video.

De Belin, who had previously been stood down for two years over sexual assault allegations, highlighted the importance of repaying the trust the club had shown him.

Jack de Belin was one of the Dragons players at Paul Vaughan’s BBQ. (Photo by Mark Kolbe/Getty Images)Source:Getty Images

“I just want to apologise for my actions the previous weekend for attending the barbecue at Paul Vaughan’s,” de Belin said.

“For someone like myself it was a poor decision. I shouldn’t have been there and I’m deeply regretful and sorry for my actions.

“I see how much of a strain it’s putting on the community at the moment and for me doing that, it just wasn’t good enough.

“From here on I’m just going to be doing everything I can to pay back that faith.

Matt Dufty, who recently penned a one-year deal to sign with the Canterbury Bulldogs, was another who apologised in the video.

“I let a lot of people down, I let fans, staff, sponsors, family and the NRL in general,” Dufty said.

“Just know that I’m going to work my hardest to earn back the trust of the fans and all the members and the staff of the Dragons and of everyone in the NRL who work so hard to keep this game running.

“We know how badly we messed up and we’re truly sorry. We just got to do our best now to come out and play some good footy for the rest of the year and make it up to all the fans that have stayed loyal to us.”

Dufty will serve his one-game suspension against the Manly Sea Eagles on Friday night alongside Tyrell Fuimaono and Kaide Ellis.