The good news for West Coast is that they are inside the top four and forcing Geelong and Richmond to both win their final matches of the season to tip them out.

The bad news is that key forward Josh Kennedy is in doubt for the first final after landing awkwardly on his left ankle midway through the second quarter. 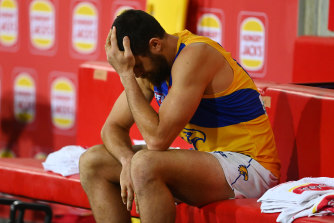 By the time his injury occurred the Eagles appeared to have regained control of the match after going scoreless in the opening quarter, the first time the club had managed to do so since St Kilda pinned them to the floor at Waverley Park in round 21, 1998.

Liam Ryan gave them the spark when they needed it, his acceleration inside 50 troubling the bearded Luke McDonald. Ryan started the run when he helped create a loose ball for Jack Darling, who dribbled through the Eagles' first goal.

Ryan then hit Brayden Ainsworth on the chest at the top of the goal square for their second.

He kept the third goal to himself as he turned a defender inside-out on the boundary before settling himself to kick an astonishing goal.

It was a spree that reeled in the Kangaroos and marked Ryan as one of West Coast's most important players heading into the finals. He changes games and his pace and leap make him a difficult match-up.

The disappointment for North Melbourne is that they should have been further in front at quarter-time having dominated possession. Four Eagles had failed to touch the ball in the first term as the Kangaroos won it 96 times to West Coast's 57.

The Roos won first and often last possession in a chain but struggled to convert, kicking 2.4 when the numbers should have been the opposite way around.

Having blown their best chance of winning they would have been forgiven, to some extent, to turning their minds to lying on the sand for a couple of weeks rather than digging in for a fight.

But to their credit North kept coming but again their goalkicking let them down with Todd Goldstein and Jack Ziebell both guilty of missing easy chances to take the lead in the third quarter.

The ball was slippery but the excuses would need to be too because the errors cost the Roos a realistic chance to claim a big scalp in a disappointing season. 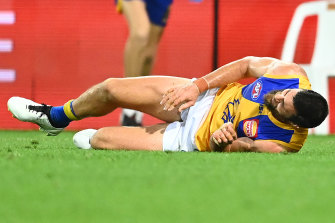 Eagles spearhead Josh Kennedy goes down against the Kangaroos.Credit:Getty Images

Instead the two teams entered the final quarter on the same score, 28 apiece.

The Eagles, needing the win more than their opponents, took their chances when it mattered with Oscar Allen – the team's impressive ruck-forward – kicking two quick goals midway through the term to break the stalemate.

It proved the difference in a match as scrappy as a crisper in a student's fridge with the Eagles perfunctory and the Kangaroos depleted and ready for the season's end after eight consecutive losses.