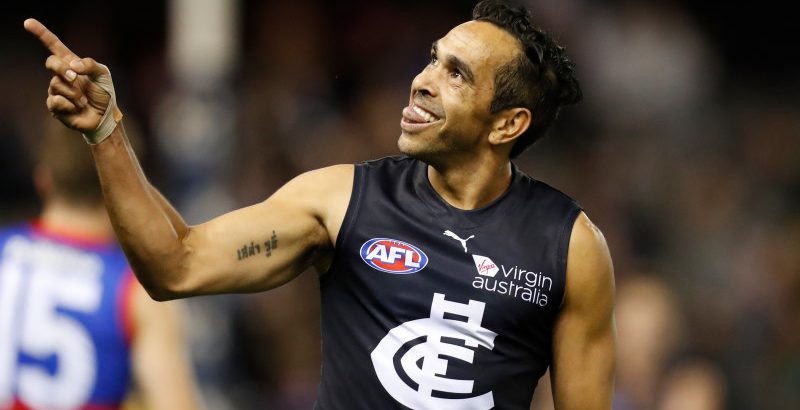 Eddie Betts puts a smile on the face of footy. He fits into no box, except the one he leaps out of. Even his name is a one-off. You have to say it quickly, Christian name rolling rhythmically into surname, rat-a-tat. His toddler son used to in living room re-enactments: “Eddiebetts! Eddiebetts!”

Betts is everyone’s at least second-favourite footballer. He mutes old enmities, transcends parochialism, runs across state lines. Carlton people couldn’t work up a grudge against him when he left for Adelaide. Nor could Adelaide when he returned to the Blues. In Carlton-Adelaide games, both cheer squads would chant his name. 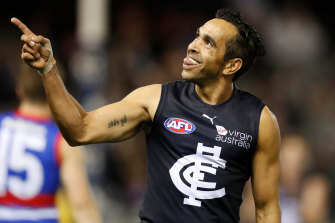 One of a kind: Eddie Betts. Credit:Getty Images

His eternal smile is all the more remarkable for the recent efforts of so many to wipe it off. Across the fence and through social media, the scourge of racism keeps alighting on him. It was incongruous. He has always been so open, so guileless.

He’s bewildered to be the target. As recently as last week, in the wake of the Taylor Walker incident, he bared his soul again. He sounded like defeated then. But his career, the style and the substance, will be his ultimate victory. He’ll have the last laugh.

There is in his football an innocent, almost baby-like joy. Fans feel it. Umpires and other players exchange winks. Everyone barracks for Eddie. In 2016, he kicked the goal of the year, for the third time, bringing the Adelaide Oval house down. It followed a close call on the boundary line. When the boundary umpire got home, his wife said: “I’m glad you didn’t call that out.”

He kicked the goal of the previous year from the same pocket, a 50-metre, left-foot torpedo from the boundary on the run. You could trip and break your leg just writing that. In all, he won goal-of-the-year four times. At the Adelaide Oval, they named a pocket after him.

Betts says he doesn’t really know how he does it. It is all instinct. “I just make stuff up,” he once said. Sometimes, he seems to startle himself. When he celebrates, his evident astonishment reflects ours. He is given few instructions: what would be the point? He might be the last freelancer in football.

Betts is an antidote to the heaviness of the footy discourse. He is a blithe spirit in an often needlessly ponderous pursuit. He sits outside jargon. He can’t be defined by stats. That stupidly brilliant goal in 2016 goes down on the stat sheet as one kick. If it had trickled into the goalpost, it would have been one ineffective kick. Pah!

He is called a small forward, but it would be better if it was forward pocket, from footy’s old glossary. He’s that size, and he fits snugly in that place. Dumpy by the standard of AFL bodies, wearing shorts that hang off him, he is the unlikely kicker of unlikelier goals, not to mention good for the occasional nomination for mark-of-the-year, too.

You won’t see him streaming out of half-back, or prowling alone out on the wing. He does all his work in that part of the ground where the boundaries close in, the bottleneck where the ambush awaits. It ought to limit his possibilities; instead, it expands them. It is the necessity that mothers his invention.

Betts’ way is distinctly Indigenous. He does not so much get the ball as lead it on a dance. In his hands, it comes alive. When he puts it onto his boot, it is the same; he is not merely using it, but working with it. They’re a pair, him and the ball.

So it is that he kicks left-foot barrels from the left pocket, right from the right, bananas from both. He kicks around corners and through slits, working with the angle and against. He kicks at full speed and when stopped dead, frisking at the front of packs or sneaking around the back. He roosts, dribbles and toe-pokes, and through they go.

He’s the little man who stands taller than the lot of them.

He kicks in the AFL the goals we all tried to kick in the playground, and the goals we could not have imagined kicking even there. He makes a hard game look like a lark.

It hasn’t always been so. Events overtook him twice, when leaving Carlton, again when leaving Adelaide. Neither was his doing. Both pained him. But he’s outlived it all. He’s the little man who stands taller than the lot of them.

He has a back story, and a cause, and both are rooted in his Indigenous heritage, and more power to him for that, but it wouldn’t matter if he did not. He’d still be Eddie Betts. His footy will always and forever more speaks for itself.

Several generations of footballers listed their starry-eyed childhood hero as Peter Daicos. He retired more than 25 years ago, and his cult has just about worked its way through the system now. You imagine in another generation’s time the answer will be Betts.

Perhaps it is as simple as this: when Betts approaches, you just know he is going to make you feel better than you did a moment ago. Who will do that now?

This is an edited and updated version of a tribute to Betts on his 300th game in 2019.