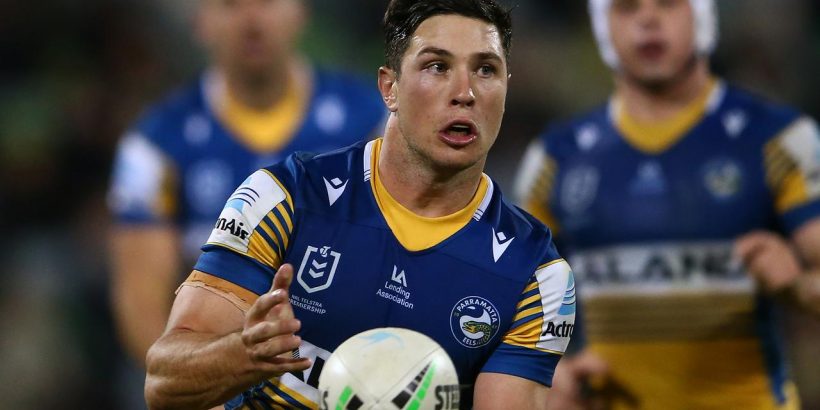 Mitchell Moses hopes to have his future sorted in the coming days before he takes on the hottest young prospect in rugby league when the Eels tackle Sam Walker and the Roosters in a Friday night blockbuster.

The Eels halfback has until Round 10 to activate an option for the 2022 season, but he and his management are keen for an upgraded deal that would keep him in the blue and gold jersey for the next four years.

The length of the contract is the sticking point, with Moses reportedly happy to take less money to stay at Parramatta rather than make the move to Brisbane who are in the hunt for a star playmaker and have the cash to lure a big fish north.

“The club and my management are trying to work it out at the moment,” Moses said after Parramatta’s cruisy 32-10 win over the Bulldogs.

“I haven’t heard anything, so I’ll leave that up to my management. Hopefully we can sort something out, but I’ve left it up to them, and they’ll let me know when something is ready to sign.”

A couple of the other dominoes have already fallen with Chad Townsend and Tom Dearden signing with the Cowboys, but Moses says he’s blocked that all out.

“I’ve just got to play good footy here at Parramatta. My full focus is here on Parramatta, playing good footy and getting wins,” he said.

“I love my time here at Parramatta, so hopefully something gets sorted out.”

Moses has been integral to the Eels’ strong start to the season. (Photo by Matt Blyth/Getty Images)Source:Getty Images

Moses would love to have the deal signed this week ahead of Parramatta’s crunch game with fellow top-four side the Roosters.

The Bankwest beauty is one of the most-anticipated games of the year, with Parramatta keen to claim another huge scalp, albeit against an injury-ravaged side that is reeling from the distressing scenes of Brett Morris and Lindsay Collins going down in Newcastle.

Despite the setbacks, the Roosters still boast a star-studded side led by rookie halfback Sam Walker who looks like he has the talent to dominate the NRL for the next 15 years.

The teen sensation had four try assists and scored one of his own in the big win over the Knights as he pulled out all the weapons in his arsenal to bamboozle the defence with long passes, short kicks and a running game that defies his lack of size.

Moses is in awe of what Walker has been able to do at that age, admitting he has only recently found his groove after debuting at the Wests Tigers as a teenager.

“It’s a very hard thing to do. I’m pretty much only doing it the last couple of years, I guess, so for him to do it as an 18-year-old (is incredible),” he said.

“He’s obviously got a lot of help there with a great team. They won back-to-back premierships a couple of years back and they’ve held that squad. He’s playing off guys like Teddy and other great representative players who can teach him footy.

“It’s probably the best team to go to as an 18-year-old half. Coming through, you probably want to come through with a Roosters side, and he’s definitely done that.”

The Eels will likely send plenty of traffic Walker’s way, but even the sight of an incoming Junior Paulo might not be enough to halt the young half’s momentum.

“He’s proven to be better than what I expected. He’s controlling the game and dominating it as an 18-year-old, and that’s massive,” Moses said.

“He’s dominating as a halfback and I love watching him play.”