Essendon have honoured club legend Jack Jones, who passed away on Monday surrounded by family after suffering from cancer. 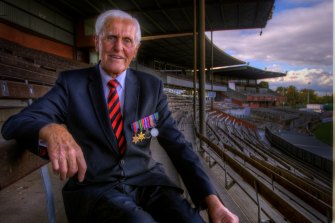 Jones supported Essendon as a child and idolised Dick Reynolds. He was first noticed by the Bombers, the club said, when playing footy in New Guinea during WWII.

"In 1946, the dream of donning the sash alongside Reynolds was realised, and there was no looking back for the then-21-year-old,” an Essendon statement read.

"His contributions off the field were also profound."

Essendon icon Tim Watson said on SEN: "Jack Jones had a big beaming smile, he was gentle and a statesman-like figure. He became really prominent at the footy club when we pieced together the hall of fame. In a lot of ways, he was the bridge between the new and old Essendon."

Matthew Lloyd wrote on Twitter: "Jack was universally known amongst all that knew him as one of the greatest human beings on the planet. An absolute gentleman who had a real aura about him yet made everyone around him feel so comfortable in his presence."

Hosting match days and running Windy Hill tours for more than two decades – into his early 90s – he was an evergreen figure who would captivate supporters with his aura, passion and legion of stories.

"He was a constant at Anzac Day games and in the lead-up to them, visiting the club to share poignant lessons on perspective with players, coaches and staff.”

He wore the no.24 jersey to honour the 24th Battalion, of which he was a member in WWII.

"One of life's true gentlemen, we will all miss you incredibly Jack.”