Masoe was taken to hospital after hurting his neck in the opening minutes of his side's 18-6 defeat in a pre-season trial match at Wakefield on Sunday. 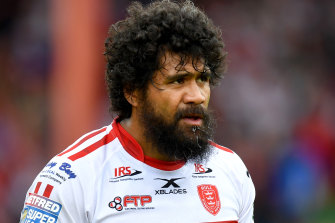 Mose Masoe suffered a serious injury while playing a pre-season game for Hull KR on Sunday.Credit:PA

The former St Helens front-rower was given oxygen on the pitch before being carried off on a stretcher and rushed to hospital in Leeds. The 30-year-old Samoan international had surgery overnight.

"Following the injury to Mose Masoe during yesterday's friendly with Wakefield Trinity, the club can confirm Mose has suffered a serious spinal injury and was operated on overnight at Leeds General Hospital," the club said. "The club will provide further updates as soon as possible. "

Masoe played in the NRL for the Roosters and Panthers before moving to St Helens in 2014. He is in his second full season with Hull KR. He helped Rovers gain promotion from the Championship in 2017.

Rovers also lost second-rower Weller Hauraki, who was captaining the team, due to an ankle injury early in the second half. He is set to have scans to determine the extent of the problem.