Carlton midfielder Sam Walsh has capped a superb year in which he was an All Australian for the first time and finished fourth in the Brownlow Medal by claiming his maiden John Nicholls Medal. 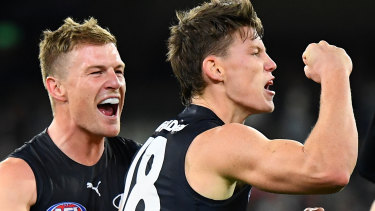 Blues head of football Brad Lloyd said Walsh had been “extraordinary” in his three seasons at the club so far.

“When Sam was drafted to our football club in 2018, he was determined to succeed and make an impact in the navy blue, and tonight serves as recognition for doing just that,” Lloyd said.

“What he has achieved in his career to date is extraordinary, and becoming a John Nicholls medallist marks another very special moment for him, which we and the whole Carlton family should be extremely proud of.

“While he is an undeniable talent, it has been extremely rewarding for our entire football club to see him continue to progress over the course of the last three years and enjoy another prolific season.

“He has worked unbelievably hard to become the player that he is and, after getting extremely close last year, we are thrilled that Sam has been duly recognised.”

Walsh finished second in the count last season, but his latest campaign was irresistible – polling 30 votes in a record-breaking Brownlow count when, for the first time, four players had at least 30 votes.

The 21-year-old was a ball magnet, averaging almost 30 disposals per game. He was No.1 ranked at the club for tackles, uncontested possessions and score involvements. His toughness in the contest, outside run, and ability to hit the scoreboard were impressive in a season when the Blues failed to deliver on club expectations and missed the finals, leading to the sacking of coach David Teague.

Walsh could be even more of a handful next season, should recruits Adam Cerra and George Hewett provide the midfield grunt and run the Blues expect them to add. A fully fit Patrick Cripps would also ensure the Blues have a deep on-ball brigade, which has club powerbrokers eying the end of an eight-year finals drought.

That new coach Michael Voss is one of the greatest midfielders in league history should also aid the development of Walsh, Cripps and company.

Lloyd was also full of praise for Weitering and McKay.

“Once again Jacob was outstanding for us this season, putting his body on the line each week and commissioning our back half while curtailing the competition’s best forwards,” Lloyd said.

“Consistently demonstrating our team values to the highest standard, he continues to thrive from a leadership perspective and his hunger to grow and progress in his role is inspiring for all of our players.

“Harry took a big leap forward in his game this year and as an emerging leader of our group. To win the Coleman Medal at just 23 years of age is a significant achievement for him as is finishing third this evening.”