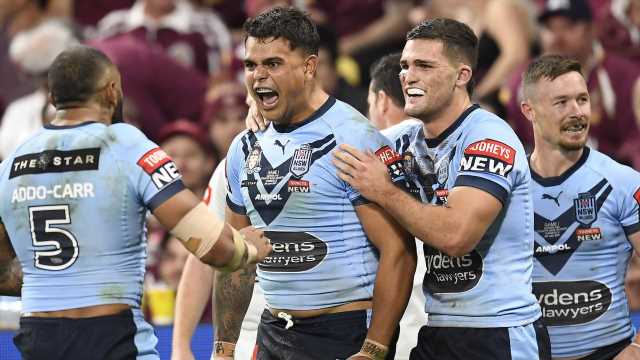 The Queensland Maroons couldn’t have got off to a worse start in the State of Origin series.

A 50-6 shellacking at the hands of the NSW Blues was one thing, but for such a crushing defeat to happen on their home turf only added salt to the heavily-gaping wound for Paul Green’s outfit.

Now, it seems that the Maroons were defeated by a team who were wearing what looked like the jerseys of a junior footy team.

In rather groundbreaking news, the Blues were in fact not wearing junior footy jerseys.

Instead, they were rocking their new Puma kit.

But to many fans, it seemed the equipment manager for the side might have got the sizes just a tad wrong.

Of course, social media was quick to point out the supposed jersey mishaps.

Sports presenter Melinda Farrell tweeted: “I want to just enjoy this Blues win but I keep being overwhelmed by a compulsion to yank their shirts down. Did someone leave them in the dryer too long?”

Nine News Brisbane reporter Andrew Lofthouse commented: “Is it compulsory for #NSW to wear the under 8s jerseys this year?”

Highlanders rugby player Elliot Wikaira Dixon got in on the action, tweeting: “Anyone else think that NSW origin kit man might of left the jerseys in the dryer way too long?”

While it might have been a topic of discussion on social media, it definitely had no influence on the performance of Brad Fittler’s side.

“Turbo” Tom Trbojevic bagged himself a tidy hat-trick, along with Latrell Mitchell and debutant Brian To’o crossing the chalk twice. Daniel Saifiti rounded out the tryscoring quartet for the Blues.

Despite the Maroons being only 14 points down at half time, the Blues ran in 30 unanswered points that had Queensland heads scratching.

But according to Cameron Smith, Green’s team went into battle with many wounded soldiers.

The former Queensland captain revealed too many players were unable to train properly during camp, with a number of them coming off lengthy spells on the sideline.

It was a tough outing for the Maroons in Townsville.Source:Getty Images

“There’s going to be some big calls made to get the correct line-up to match the Blues in Game 2,” he told Andrew Voss on 1170 SEN radio.

“I think what needs to happen, and I’m very hopeful of this, is that for Game 2 we need to pick players that are fit, that aren’t carrying injuries into the match and they need to have a solid preparation.

“They just can’t afford that for Game 2. They need to have 17 fit players to have a really solid preparation leading into that game.”

The Maroons will look to get the series back on track in Game II at Suncorp Stadium on June 27.