An emotional Lindsay Fox described his friend Frank Costa as one of the greatest men Geelong has produced, at a state memorial to honour the former Cats president and businessman.

Costa, who died on May 2 aged 83, was honoured and remembered at GMHBA Stadium in the first state memorial to be held in Geelong in 15 years. 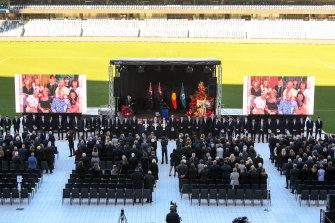 Frank Costa was farewelled at GMHBA Stadium on Wednesday.Credit:Eddie Jim

Fox said his friend lived by a creed that “you can’t do wrong doing right” and joked that he would address postcards to “The King of Geelong” when he wanted them to reach Costa and they never failed to arrive.

In bright sunshine, tributes to Costa flowed from a stage covered in flowers, baskets of fruit and a portrait of Costa with his thumbs up while the 2007, 2009 and 2011 premiership cups rested to the side and three premiership flags fluttered in the breeze above the Reg Hickey Stand.

Costa’s family, state dignitaries, football’s biggest names and prominent and not so prominent people from the local community watched on, the estimated 2000 people all touched by Costa in some fashion.

His brother Robert said Frank’s “indomitable will galvanised everyone around him” as the family built a fruit and vegetable business that allowed him to extend his philanthropic work, form the Costa Group and become the president of the Geelong Football Club in 1998. 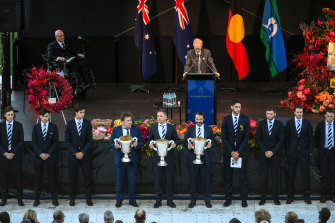 Mark Thompson, Joel Selwood and Chris Scott hold their premiership cups on stage at the memorial for Costa.Credit:Eddie Jim

Cats CEO Brian Cook, the man who helped Costa lead the club to their drought-breaking premiership in 2007 and rebuild the stadium, said it was family, faith, football and fruit that drove Costa.

“The world is a much better place because of you, Frank,” Cook said.

Such is Costa’s standing at the Cats, Geelong president Craig Drummond presented Frank’s wife Shirley with a medal to officially induct Costa as a legend of the football club in a touching moment, given they had agreed before Costa died to make the presentation on May 12. He is the first non-player to receive the honour.

The Cats’ two premiership coaches in the past 50 years, Chris Scott and Mark Thompson, and current skipper Joel Selwood then held a premiership cup each while those attending stood for a minute’s silence.

But it wasn’t the big names that Catholic priest Father Kevin Dillon felt inspired Costa to action, as he said he never forgot that he was part of the community and it was part of him.

“[It was] his connection with the ordinary person that meant so much to him,” Dillon said.

He said Costa always said: “My name is Frank and I am here to help”.