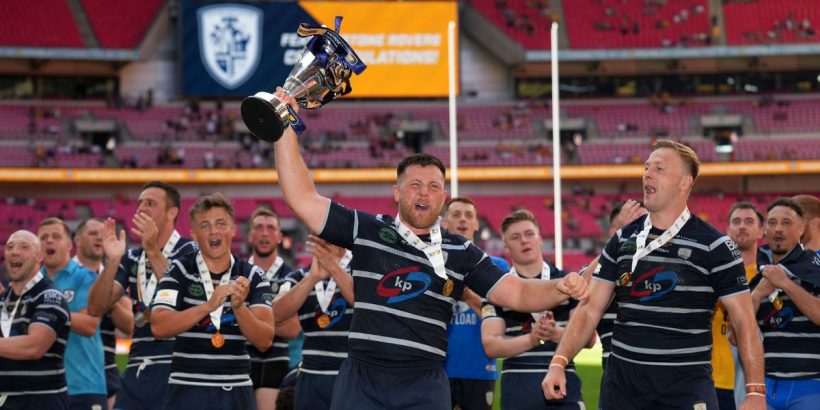 Craig Hall rapidly went from zero to hero to help steer Featherstone Rovers to the AB Sundecks 1895 Cup at Wembley.

The vastly experienced full-back appeared to have let opponents York back into a see-saw contest when he spilled a kick and allowed the Knights to level the scores early in the second half.

But after restoring his side’s lead with a penalty shortly after, Hall was then among three Rovers try scorers in quick succession as they sealed victory in the closing half hour.

Without coach James Webster due to Covid-19 and with Paul March in charge for the day, Featherstone also had influential performances from half-backs Dane Chisholm and Fa’amanu Brown, and big displays in the pack from John Davies and James Harrison among others.

York battled manfully throughout but were unable to capitalise on their mini revival after half-time.

The build-up was dominated by Covid issues, with the match in doubt right until hours before, until the Knights’ final round of testing came back negative.

The teams went into the game at opposite ends of the Championship table, with Featherstone having won all 12 matches and York just one place above the relegation spots. But that mattered little in a tit-for-tat opening half hour when the sides traded tries.

Chisholm opened the scoring by stepping through from close range before Ben Jones-Bishop jumped the highest to respond for the Knights.

Featherstone prop Craig Kopczak powered over from close range, only for Marcus Stock to respond in kind at the other end.

The match then appeared to swing in Featherstone’s favour with two tries in five minutes just before half-time.

Back rower Davies played a key role in both, first providing the pass for youngster Jacob Doyle to finish out wide, before breaking clear in midfield and sending Brown racing to the line.

But the Knights hauled themselves back into the contest with a controversial try soon after the restart.

Hooker Kriss Brining appeared to lose the ball when reaching for the line but the try was awarded to close the gap to six points.

Moments later the teams were level. Hall fumbled a kick through when colliding with his own team-mate, and Jason Bass pounced to score.

But that was as good as it got for the Knights. Hall made almost immediate amends by slotting a penalty to edge his side back in front, and winger Doyle then smartly finished a Brown pass out wide for his second try.

Hall’s touchline conversion restored a two-try cushion, and Warrington-bound back rower Harrison quickly extended that by crossing from another well-timed Brown ball.

Then Hall grabbed his own try, cutting through from Brett Ferres’ pass before stepping around Kieran Dixon to touch down.