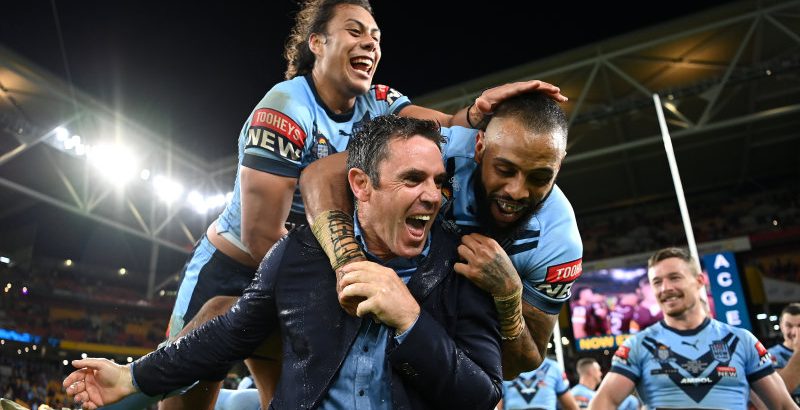 Brad Fittler believes the Blues are on the cusp of a new golden era of State of Origin dominance after keeping Queensland scoreless on home turf to wrap up the series.

NSW produced another dominant performance, a 26-0 drubbing of the Maroons at Suncorp Stadium, to return the shield to the southern state. The result comes after the record 50-6 pummelling they dished out in the opening game, raising the prospect of a rare series clean sweep. 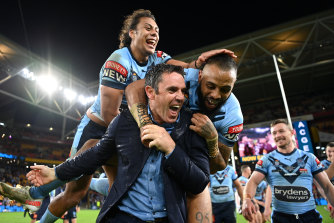 The Blues have a dynasty on their doorstep.

“So it just shows, I think what they’re saying to us is ‘we don’t all have to play the same, if we play to people’s talents and make the game very exciting, we’ve got some great athletes in our game.’

“I think they have proven that in the last two games.”

The Blues wrapped up the series despite the fact the opening two games were in enemy territory, while it’s unclear where the third match will be staged following the latest COVID-19 outbreaks.

Asked about how special it would be to produce the first series clean sweep since the great Queensland side of 2010, the NSW coach said: “Absolutely. If I go back to that team, it was a great team. It’s a bit of a sign for respect to each other.”

‘A lot of satisfaction, the quality of the group was just a joy to be a part of really.’

Fittler was unaware it was the first time that the Maroons had been held scoreless at Suncorp Stadium until informed at the post-match press conference.

“A lot of satisfaction, the quality of the group was just a joy to be a part of really,” he said.

“To get down to the death in the first game, they saved a try at the death and then to do it again here – Brian To’o saved a try on the death and Tom Turbo [Trbojevic] saved one when they didn’t have to – that’s good to be part of a group like that.

“The sign of how strong the group was was the way they defended on their line.”

“It’s pretty special, some of the best players in the game at the top of their game coming into a team together and have all bonded well,” Tedesco said.

“There’s no egos, which is a huge thing. Everyone is just happy to do their role and take a lot of confidence from club footy.

“It’s cool to be a part of, everyone is working for each other. That’s what we talked about all week and in both camps, having that bond to the guy next to you. It shows on the field … it’s awesome to be a part of.”

Mitchell made a triumphant return to the Origin arena, scoring a try in another scintillating performance. However, that’s not what impressed Fittler the most.

“All defence,” Fittler said. “He took the intercept, he pushed Val Holmes over, he came up with some big tackles.

“His defence was outstanding, a bit of decision making over there. They were some big plays early.”