Russell will finish up next month after navigating the Sharks through the salary cap scandal following an NRL investigation he sparked by self-reporting anomalies to head office. The Herald revealed last month it was likely Russell would part company with the club once the matter was resolved and he has ended up lasting just over a year at the helm.

Sharks officials began their contingency planning well before Tuesday’s announcement and have already drawn up a shortlist of potential candidates. Melbourne CEO Dave Donaghy is understood to be highly regarded by powerbrokers in the Shire, although he is likely to stay put. 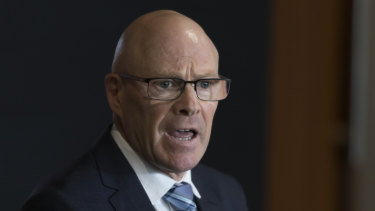 On the way out: Cronulla CEO Barry Russell.Credit:AAP

Perry is another to attract interest. Currently the chief executive of North Sydney, he has helped the Bears lure 50 sponsors and held a commercial role at St George Illawarra before joining Manly.

Despite the political instability at the Sea Eagles – the club has churned through almost a dozen chief executives since the Northern Eagles disbanded – Perry oversaw a period of success on and off the field. The Silvertails made two grand finals during his tenure and he helped them into the black at a time when club grants were considerably lower.

Having finally secured a major sponsor, Russell’s final task is to shed at least one player before the start of the season to ensure the Sharks are salary cap-compliant.

“It is with great sadness that I inform Cronulla Sharks members, fans and corporate partners that I have made the decision to resign from my role as Cronulla Sharks Group CEO,” Russell said in a statement.

“I will depart the club early April after ensuring we are salary cap-compliant for the 2019 season.

“It has been a very tough 12 months, both for the club and for me personally. As you are aware, there have been several challenges we have had to face and resolve, particularly concerning integrity, governance, finances, personnel and structural change within the business.

“When I made the decision to self-report a salary cap discrepancy last year with the full approval of the board, I most certainly did not foresee all the issues that were to follow. As hard as it has been, I did however remain committed to seeing the club through these challenging times and set a new course of proper governance and integrity. I’m proud that I’ve been able to clean this mess up and give the club every chance of success.”

NRL CEO Todd Greenberg praised Russell for his honesty, claiming the salary cap punishments would have been much higher had he not come forward.

“We are now through this very difficult period and I believe the time is right for the club to have a fresh start and be taken forward in a new direction,” Russell said.

“A new CEO will have the opportunity to start with a clean slate, alongside our talented new head coach John Morris, and build the best structure possible to lead the club forward without any negative remnants from the past 12 months. 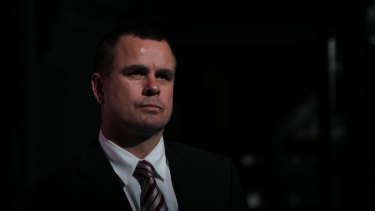 “I’m so proud of what I have achieved over the last year and see this as a real turning point for the club. It breaks my heart to walk away from a club that has done so much for me and I have a great love for. This has been my greatest honour. I will always operate with the club’s best interests at heart and I know this is best for our club and myself.

“My love for and loyalty to the Sharks remains forever strong and I want nothing but its long-term success. The Sharks will be a powerful force during the 2019 season and well into the future.

“I would like to thank the Board, my wonderful staff, our awesome playing group, loyal members and fans for the role they have played in what has been an unforgettable journey carrying out my dream job. It just didn’t end the way I had imagined.

“Lastly, thank you to my wife Jodie and family for their unconditional love and support. I could not have done the last year without you.”