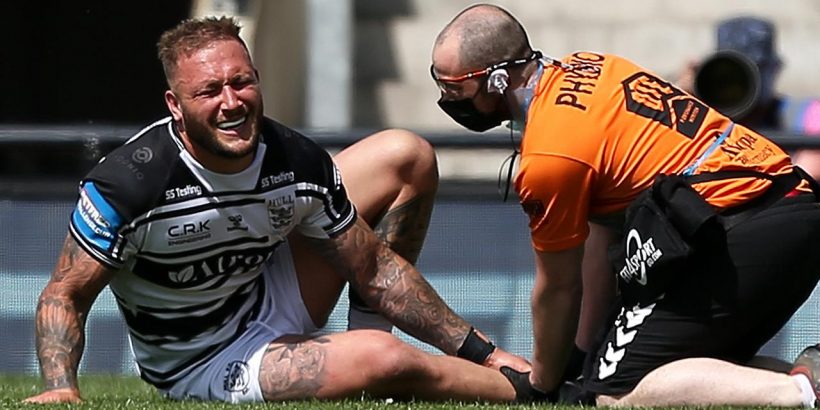 Hull FC faced St Helens at Leigh Sports Village on the weekend, with both sides playing for a spot in the final against Castleford — but the must-win fixture was embroiled in controversy.

Late in the first half, Hull centre Josh Griffin suffered a suspected achilles rupture five metres out from the side’s try line. The 31-year-old fell on the deck and grabbed his ankle in agony, dropping the footy in the process.

Fages responded by picking up the ball and sprinting over for a four-pointer, celebrating the try with his teammates.

The whole world should be talking about this. An absolutely freakish, once-in-a-lifetime occurrence. Incidents that divide are incidents that engage pic.twitter.com/POOA58akL2

Bit of a rare situation; Josh Griffin suffers what appears to be an achilles rupture, drops the ball & St Helens score the try. As unfortunate as it is to see, fair play on. But feel for Griffin, tough to stay in control in those circumstancespic.twitter.com/vwSFoJ5CAc

“It’s part of the game,” Hodgson said after the match.

“It was an error. I don’t think it was disrespectful to Josh’s injury. Theo Fages saw the ball on the ground and did what he had to do.”

St Helens coach Kristian Woolf said of the incident: “It’s play on. If that happened to one of us, we’d expect them to do that to us.”

Fages told the BBC: “He just dropped the ball, so I just picked it up and ran for the try.

“It’s play on. I only realised after that he’d gone down. I just played to the whistle, it’s play on for me. It’s unfortunate for Josh, I hope he’s well and it’s not too bad.

Fages has played 136 games since joining St Helens in 2016, scoring 37 tries for the club. He has also represented France in 15 Test matches since making his international debut in 2013.

“It’s obviously very hard to take at the moment,” Hodgson said. “There are a few boys shedding some tears in there. There was a lot of effort and the way it went at the back end was not indicative of the performance.

“The injury to Josh affected our rotation but that’s part of rugby league unfortunately. You’ve got to adapt. We tried our best and fell just short on the day.

“We’re disappointed but we need to make sure we process it and move on.”

St Hellens will face the Castleford Tigers in the final at Wembley Stadium on Saturday, July 17.