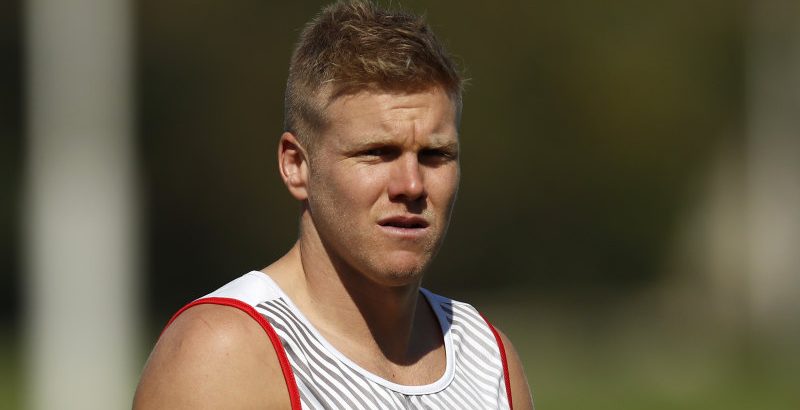 While ruckman Rowan Marshall is set to return from a foot injury to confront West Coast and Nic Naitanui on Saturday at Marvel Stadium, the injury-riddled Hannebery has again strained a calf. Coach Brett Ratten revealed on Thursday that the midfielder would be out for another four weeks. 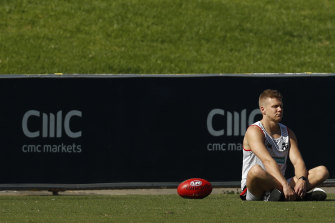 Dan Hannebery takes a seat at training on Thursday.Credit:Getty

Geary had also been closing in on a return after breaking his leg in the pre-season but Ratten said the defender had a bone spur in his ankle and would be out for six more weeks following surgery.

Hannebery, 30, has played just 13 AFL matches since joining the Saints at the end of 2018. This injury is on the opposite calf to the one that had kept him out of the start of the season. He appeared on the track at Moorabbin on Thursday morning but was limited to walking before sitting on the opposite side of the ground to most of the squad.

In better news, Ratten said Marshall would be included in the side to face the Eagles after getting through three quarters in the VFL on the weekend.

Fellow big man Paddy Ryder is back at Moorabin after spending several weeks away because of personal reasons but will need to recondition for AFL-level football, with Ratten suggesting the experienced ruckman was around three weeks away from coming back.

Zak Jones (ankle) is clear to play against West Coast despite a scare in last week’s loss to the Bombers. But the Saints will need to make at least one forced change because of Jade Gresham’s season-ending Achilles injury. Ratten said the Saints would weigh up who would support Marshall in the ruck. Shaun McKernan, Jake Carlisle and Josh Battle are among the options to pinch-hit. Back-up ruckman Paul Hunter was among a group of fringe and youth players who continued to train after the Saints’ main session on Thursday, suggesting he will not be recalled to complement Marshall, who Ratten said could be on limited game time against the Eagles.

Ratten said Hannebery had been only a couple of weeks away from returning.

“‘Hanners’ has had a calf injury yesterday, Tuesday. He’s got a strain in his calf, so he’ll be out for four weeks. It’s not the same areas, it’s different, it’s a new one,” Ratten said.

“I think when you go through your career you have some luck not go your way, and he seems to be having a lot of luck not go his way. He’s done everything right.

“Everything he’s done is first-class. We cannot knock anything. He’s always there on time. From a leadership point of view he’s having players over at his house. He can’t sort of get to that next step. He gets to a point and then something happens.

“‘Gears’ has got some pain in his ankle, not from his broken leg but from his ankle. He’s going to go in for an operation tomorrow as well. 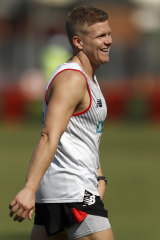 Hannebery was restricted to light duties at training.Credit:Getty Images

“It is hard to sit there and not be frustrated for the players who have had multiple [injuries].”

With St Kilda’s season precariously placed at 1-2, Ratten said the coaching staff had held thorough reviews with the players of the loss to the Bombers.

“The way that we played, you can deal with losing games of footy but just the way you go about it, that was probably the thing that sat so poorly with everybody,” Ratten said.

“We had a good chat around it and showed a little bit of vision. I think we can not allow that to happen again.”

James Frawley is progressing well from a hamstring injury and is on track to return between rounds six and eight.