Tyson Frizell will make a call on his future in the next fortnight as Dragons officials remain confident they can ward off big-money interest from Newcastle and keep their representative back-rower.

The Dragons met with Frizell's management during the week with the 28-year-old keen to avoid his contract negotiations dragging into the early rounds of the season. 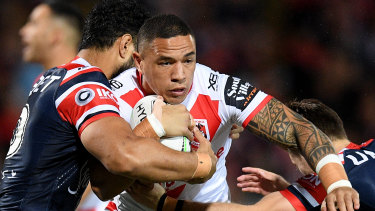 Tyson Frizell is a man in demand and is set to make a decision on his future before the NRL season starts.Credit:AAP

Frizell was away all last week with his teammates in camp at Port Stephens and then Mudgee, and will sit down with family this week to weigh up the most important deal of his career. The Dragons and Knights have reportedly tabled three-year deals, although St George Illawarra maintain they are open to changing the length of the offer if required.

Frizell has made a point of stressing premiership success, not money, will sway his decision.

After the Dragons lost the grand final in Perth at the Nines, Frizell said: "People know that I'm looking to win a premiership hopefully and play some good footy, play finals footy. That's what we do it for; I don't do it to go chasing money. That's a nice part of it, but if that's what's driving us, we're not going to be successful at all."

Frizell captained the Dragons against the Knights last week in Maitland and shared the duty with Ben Hunt in Saturday night's Charity Shield.

He met with South Sydney last year about a possible move and the chance to replace Sam Burgess before the Redfern club pounced on Latrell Mitchell and Jai Arrow, while Parramatta reportedly kept a close eye on Frizell's movements. The Eels never met with Frizell and are now trying to extend their own left-edge back-rower, Shaun Lane.

Dragons coach Paul McGregor has made his feelings clear to Frizell and said last week, "He's got my support, whatever his decision is".

Trent Merrin was once forced out of the Dragons because the joint venture refused to increase their offer and he said they must not allow the same thing happen to Frizell.

Merrin, who has returned to his childhood club said Frizell's signature should be the club's top priority. 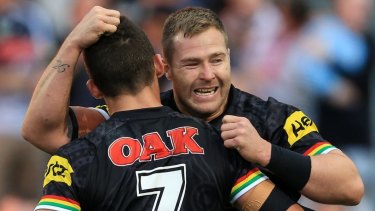 "He's the most important signing we need to get across the line," Merrin said. "He adds so much to this team: he's passionate, he's a junior and loves the Red V.

"He's done everything in the game and that [experience] drip feeds into the playing group. He's the main man at the moment and we need his signature ASAP.

"I have a few words with him every day and kick him in the arse to try and get him across the line.

"At the end of the day, he's got a family and I'll back whatever decision he makes. But I love Friz, I've played a lot of footy with him on the rep arena and in the Red V, and I've played against him so know what damage he can do, I'd rather play with him than against him."

Meanwhile, Merrin said James Graham, who has been conspicuous by his absence during pre-season trials, was in no doubt for round one.

"'Jamma' is a gladiator," Merrin said. "He's someone who everyone looks up to at the club. He's played a lot of football and doesn't need these [trial] games under his belt. He knows what to do.

"They'll rest the big boy up and get him ready for the big season ahead."