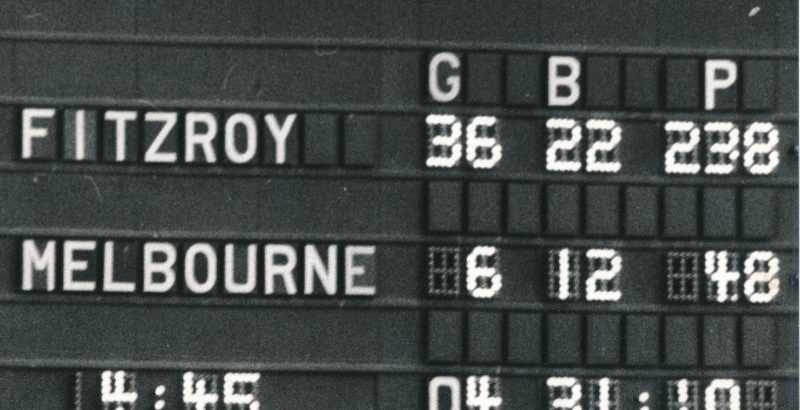 Slaughter at the League’s coliseum

Fitzroy memories in the past have been rather painful, but one became useful on Saturday as the Lions basked in unprecedented glory. 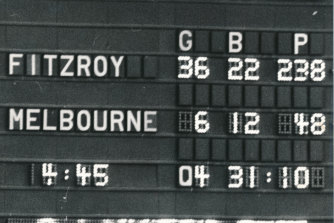 It happened about five years ago, when Fitzroy was being thrashed by Richmond. The Tigers already had 29 goals on the board yet veterans like Kevin Sheedy urged on the team for more goals.

It impressed Harvey Merrigan, the Lions’ hapless fullback that day. “I always remembered that,” he said.

So it was fitting that Merrigan, after giving up a long career at fullback and denying himself the chance of leading the Lions into the finals by forsaking the captaincy job after only one season, kicked a fine goal in the final quarter against Melbourne at VFL Park on Saturday.

Merrigan can probably recall each of the handful of goals he has kicked, but this one will be one to tell the grandchildren about.

The 12,000 people who will be able to say “I was there that day” cheered wildly. Coach Bill Stephen asked club officials to find out whether the crowd was cheering a record, and back came a happy “yes sir” message.

Stephen had already sent out a message to captain Ron Alexander to say the side had created club history and urging them to “go the whole hog”.

The players were only too happy to get the side’s name in the history books, kicking 10 goals in the final quarter to follow a 12-goal blitz in the third.

Stephen admitted he thought a club record was in the offing this year, particularly after the side kicked 25.22 against Essendon in the fifth round, “but never in my wildest dreams did I think of a VFL record.”

And not only was it the club and VFL highest, the 190-point win si the biggest winning margin, giving the Lions a record treble.

Fifty-eight scoring shots in a match seems unbelievable, but the fact is the score could have been bigger!

Fitzroy’s domination was so great that most observers felt the side should have kicked more than 14.14 in the first half, which ended with five successive behinds. This seemed to be confirmed by the 22.8 kicked in the second half.

And players not noted for making wild statements, such as the experienced Merrigan, believe 40 foals is possible.

The match was a foregone conclusion after only 15 minutes, Interest returned only when records became possible.

It is being kind not to discuss Melbourne’s performance too much. It was abysmal, More than one Reserve grade side could have given Fitzroy more opposition.

Without Carl Ditterich and Robert Flower, the Demons had nothing.

One wonders how many would get a game with any other side. Only Graeme Gaunt and Laurie Flower can be proud of their efforts.

The scoreboard and the statistics tell it all. Fitzroy had more than 400 kicks and handpasses, 140 more than Melbourne.

No one could have beaten Warwick Irwin or Garry Wilson. Look at their statistics – Wilson 24 kicks, 14 marks and a staggering 18 handballs. Irwin’s score was 24, 10 and 10.

But while the Lions are lapping up the success, players and officials who know what it is like to be on the chopping blocks are not getting carried away.

Recent losses to Carlton and Richmond had many observers forecasting the end of Fitzroy, despite a long stretch of wins previously. The sudden derision reminded everyone how fickle is the football business.

And records are made to be broken