Wild in the streets

Collingwood fans stormed the suburb last night after their team’s Grand Final win resulting in dozens of arrests, injuries and a decision by police to shut off alcohol sales at official celebrations. 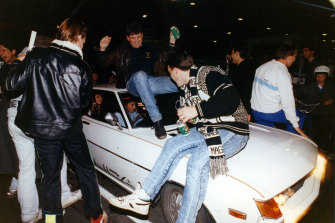 Collingwood fans party on into the night after their team’s Grand Final win.Credit:Wayne Ludbey

Police made dozens of arrests, mainly for street and behavior offences while organisers lost control of the thousands of fans who had flocked to the club for a concert and player presentations.

Organisers of the club function were ordered to stop alcohol sales at midnight – two hours before the advertised finishing time – because of concerns about the crowd.

The crowd spilled up Johnston Street and into the nearby pubs which all had a brisk trade. Outside the Cricketers Arms Hotel in Richmond the footpath was covered in discarded beer cans.

The streets were crowded with enthusiastic fans, who often spilled out into the traffic as local hotels and restaurants failed to accommodate supporters going into the inner-city suburb in their tens of thousands.

Five people were taken to hospital and more treated for injuries. Tension at the ground increased as fans awaited their Grand Final heroes. A St Johns Ambulance duty officer, Mr Andrew McDonnell, said there had been dozens of assaults and one man had broken his arm in a clash with other fans. 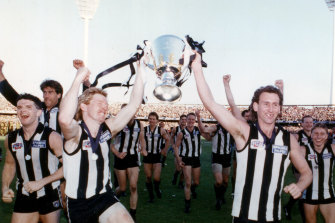 Other injuries had included a dislocated elbow, and fractured ankles. One of the five taken to hospital had suffered a suspected heart attack, police said.

There was pandemonium as the players arrived and the football identity, Mr Lou Richards, urged the crowd to behave. Earlier, while supporters brawled in front of the bandstand the band played Louis Armstrong’s ‘Wonderful World’.

The carnival atmosphere was restored when all joined in to sing ‘Good Old Collingwood Forever’.

Police reported 25 arrests at the city watch house and another five were arrested at the Victoria Park celebrations.

The crowd waited until almost 11 pm to see the players they had come to pay tribute to for winning Collingwood’s first flag in 32 years.

Performers had to call on the crowd to move back as police and security officers hoisted children on to the stage from the front row.

The club president, Mr Alan McAllister could manage only to tell the crowd he “loved them all.”

The violence which followed the historic win was also seen in other inner Melbourne suburbs. Police logged 260 calls every hour reporting violent incidents. Police said dozen of brawls were reported in city and suburban hotels.

Senior Sergeant Greg Hillier, of the special police task force at Victoria Park, said the crowd was rowdy but because of the special circumstances of the celebrations police were trying to be more lenient.

He said the 40 police at the ground were prepared for more trouble later on. The main problem had been revelers who were non-members trying to enter the Collingwood club social rooms.

Police said there had been some reports of vandalism around the ground but souvenir hunters were expected to make their mark later on.

Police said last night that they would charge 38 people with selling tickets without a permit after a crackdown on scalpers earlier in the day.

More than 30 tickets and about $4700 were seized from scalpers and Inspector Mark Dillon said the ticketing agency Bass had reported several ticket forgeries. He said the fake tickets were very similar to the original ones.