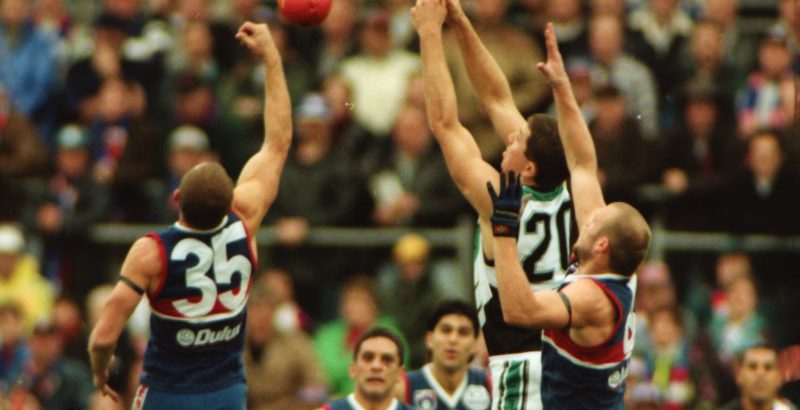 The power of faith

PORT ADELAIDE stuck to the club’s long-set principles at Optus Oval yesterday and was rewarded – many times. First, with a come-from-way-behind, 12-point win over top dogs, Western Bulldogs. Second, with its first win in Melbourne. And third, with a belief that the Power can make the finals in year one. 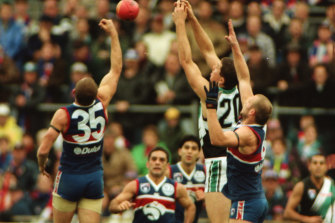 Players leap for the ball.Credit:Ken Irwin

Coach John Cahill, regarded more as a motivator than a tactician, willed his team to hang in when trailing eight goals to one at quarter-time. The players maintained his faith, with a lot of help from an unlikely source, and took the game away from the Bulldogs with a 13-goals-to-four final three quarters.

Full-forward Scott Cummings, one of Port‘s best, said he should not repeat the coach’s quarter-time words. Cahill precised them for general consumption.

He said he was concerned about a whitewash – the Bulldogs already appeared to be celebrating one – and urged his players to contest more. (The Bulldogs’ runners were finding space and cutting up Port.)

“At half-time we were five (goals) down (it was 16 points actually) and I thought if we did win the third quarter we were a sniff,” Cahill said. “Then we believed we could win.”

As the Power kept slogging away, the match-ups that had gone Western’s way early swung to the visitors, and a second-gamer put his hand up. 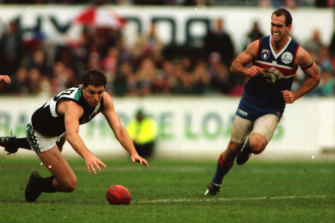 Nigel Fiegert came off the interchange bench at quarter-time and gave the Power a target at centre half-forward as well as taking the pressure off Cummings.

Fiegert had been brought over as a defensive back-up against the Bulldogs’ tall forwards if shorties Gavin Wanganeen, Shane Bond and John Rombotis were overpowered.

He pulled another string from his bow and became a focus to replace Darryl Poole, who has been out for many weeks with a severe groin injury.

Fiegert played it the Port way – hard – and, said Cahill, “He turned the game for us.” 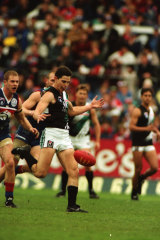 The coach, in the Tommy Hafey tradition, kept him benched for the whole first term, not wanting those on the ground to lose confidence or fear their coach had lost confidence in them.

As the Power’s backs and midfielders pushed the ball downfield with greater frequency, accuracy, economy and direction than the Dogs, Fiegert and Cummings (five goals) had a field three-quarters of a day.

1. Brendon Lade: After the first break he took over from Matthew Primus in the ruck and took charge around the ground.

2. Brayden Lyle: Stitched and broken nose notwithstanding, he burrowed the ball to his team’s runners, and laid the best tackle of the game – a brave and free-kick-earning hurl at a rampaging Chris Grant.

With everyone else picking up their workload, it was no wonder Cahill claimed three things after the game.

1. That the Melbourne monkey, still very small in Port‘s debut season, was off its back.

2. That given the conditions it was the AFL Port‘s best fighting win.

3. That the team can consider itself a genuine finals chance if it wins five of its last 10 games.

It is not panic stations for the beaten but still well-situated Dogs. Coach Terry Wallace, while critical of his players, is not going back on his word to give them a break until Thursday.

He considers having to “wear our poorest performance of the year for the next two weeks” is punishment enough for three quarters that lacked character.

“We really let ourselves down and certainly our supporters down,” he said.

Club officials, congratulating the club pre-game on a 20-year membership high of more than 14,500, must now be concerned the drive will stall.

Yesterday, the Dogs’ game stalled because they were extraordinarily indirect. They had 211 kicks to Port‘s 185 and 137 handballs to 105.

The fiddling figures earned them these comments . . .

From their coach: “I thought our blokes went on holidays after quarter-time and that was very disappointing.”

From Port’s coach: “I love that . . . it means we’re playing a more penetrating game.”

And that the power resides in those who persevere.

Cummings v Sir: The Port spearhead kicked all five of his goals by three-quarter-time and they were priceless in the context that the Power had to manage only eight to that point.

Paxman v Minton-Connell: The Bulldog full-forward had his first kick 18 minutes into the second quarter, was dragged in the third and had only one more touch when he returned. Paxman’s effort was superb.

Wilson v Dimattina: They played wide of each other and the hard-running Bulldog was best on ground to half-time, with his double-digit second-quarter return outstanding. But Wilson improved as the match wore on and he had many vital second-half possessions, including kicking the crucial opening goal of the last quarter.

John Cahill, Port Adelaide: “At quarter-time, we were worried. We were eight to one down and I felt . . . the players didn’t deserve that. At half-time we thought if we could win the third quarter we were a sniff.”

Terry Wallace, Western Bulldogs: “Our guys all wanted to get on the end of something and all wanted to be best on ground. We were trying to feed teammates and not all were in a position to receive.”

Nigel Fiegert (Port Adelaide): After the first quarter, the 21-year-old was positioned at centre half-forward where he was the biggest factor in turning the game. Fifteen disposals, five marks and three goals were his raw statistics, but his influence was monumental. — Bruce Eva.