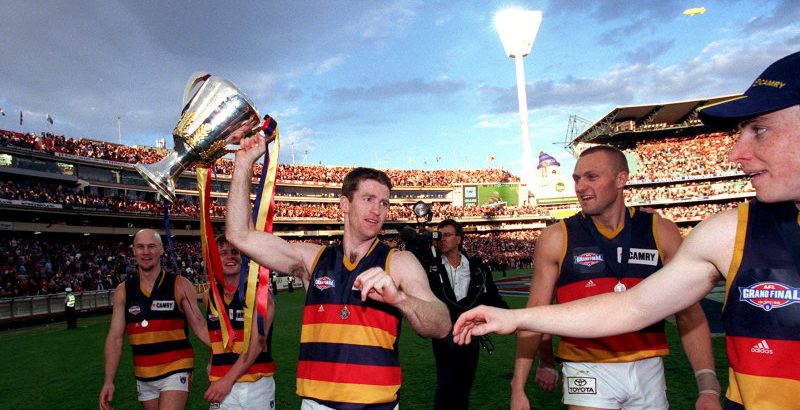 TWO YEARS AGO, they were still impostors. Last year’s historic first premiership was supposed to be a fluke. Now, after its second flag win in as many years, Adelaide might just about be the team of the decade. 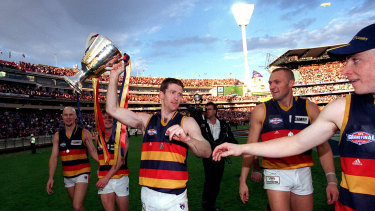 In a remarkably similar story to last year’s grand final win over St Kilda, Adelaide overcame a sluggish start – trailing by 24 points at half-time – to run all over a tiring North Melbourne by 35 points, the Crows booting 11.12 to the Roos’ 2.7 in the second half.

In doing so, Adelaide again created football history, becoming the first side to win the premiership from fifth position. It also became the first side of the 1990s to win successive premierships. And it won its second flag on the trot after playing its last five matches of the season interstate.

While its margin was even greater than last season, Adelaide’s win came against even tougher odds, better opposition and in a higher-standard contest.

This was definitely one of the better grand finals of the modern era before another good crowd of 94,431, filled with good, open football, plenty of hard clashes and a tighter finish than the scores indicated.

Only two points separated the teams at three-quarter-time, the closest margin going into the last quarter of a grand final since Richmond’s win over Geelong in 1967. 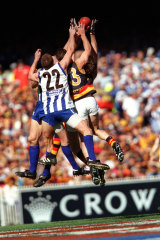 Players compete for a mark in the grand final.Credit:Pat Scala

The Roos will be kicking themselves this morning. They completely dominated the second quarter, only to come away with a very wasteful 2.11. Their lead of four goals should have been at least eight and the premiership all but sealed. After quarter-time, the Roos added 4.18. Their final tally of 8.22 was the most inaccurate grand final scoreline since Collingwood’s 9.24 in 1980.

But that shouldn’t detract from one of the great grand final wins. The Crows set a new standard for premiership campaigns in 1997. This effort surely betters even that.

Brilliant Adelaide little man Andrew McLeod became only the second player, after Hawthorn’s Gary Ayres, to win a second Norm Smith Medal with another sensational performance, picking up 30 possessions and turning a second grand final on its head after being shifted into a faltering midfield.

This year he had even more support, Kane Johnson collecting 16 of his 24 disposals after half-time in the same area. Brett James and fellow midfielders James Thiessen and Andrew Eccles also were prolific.

Neither can Peter Caven’s role be understated. The former Fitzroy and Sydney defender had the toughest job, minding North Melbourne champion Wayne Carey, and pulled it off with aplomb, holding the champion to five marks and one goal.

Even Carey’s faultless finishing went awry. He kicked 1.4, and missed a golden opportunity from only 25 metres to bring North back within one goal midway through the final term. The symbolism was overpowering.

In what must have seemed a chilling dose of deja vu for North Melbourne fans, five goals to Darren Jarman again proved decisive – just as they were in last year’s grand final. He, Nigel Smart, who played brilliantly to kick three goals after being collected heavily by North’s David King, and Peter Vardy were the only players to kick more than one.

Adelaide coach Malcolm Blight, leading a team into a grand final for the fifth time in 10 seasons, won his second flag to all but banish any demons that remained from three grand final losses with Geelong.

Once again, his influence on a premiership match was profound, his midfield moves again the key to the turnaround and his encouragement to his players to open up the game bold, given their perilous situation. 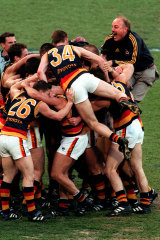 Coach Malcolm Blight jumps over the back of players after the Crows win.Credit:Simon O’Dwyer

But Blight wasn’t about to lapse into superlatives. He’s sticking to his theory that three premierships would be a miracle, and, more ominously, that Adelaide has plenty of improvement left in it yet.

“To come from fifth, it’s never been done before. And you had to knock off (teams) one, two and three, so it’s not been an easy task for the lads,” he said. “I don’t think the system will allow a side coming from eighth to win it, but I think this might have been the first hurdle, coming from fifth, so I could see somewhere down the track perhaps a sixth or seventh winning it.”

The ever-collected Blight said he didn’t feel the game was slipping away at half-time. “No, no, but we were in a spot of bother,” he said.

North Melbourne coach Denis Pagan praised the Crows’ “very slick” performance after half-time, but said his team’s inaccuracy had made all the difference.

“I don’t think there are many times when you have 30 shots for goal and you get beaten in a game of Australian rules football – it happened to us today,” he said. “It was just sloppy kicking for goal.

“Our second quarter, if we had kicked straight, it could have put us a long way in front at half-time . . . but we fell apart at the seams.”

Pagan refused to hear any criticism of his captain’s game. “He’s human and we can’t rely on Wayne Carey all the time,” he said. “There’s a lot of other people who were a lot worse off than Wayne.”

GOAL OF THE DAY

Wayne Carey (North Melbourne): It was his only goal for the day, but what a goal it was. In the first quarter, Carey at full run tumbled the ball on to his boot and kicked towards goal. It looked to cross the face, but curled miraculously to slip straight through the middle for North’s fourth goal.

QUOTE OF THE DAY

Simon Goodwin (Adelaide): “I think Blighty must be a genius now. He’s done it two years in a row.”

Nigel Smart (Adelaide): He battled hard in defence, but it was when Smart was switched to the forward line after half-time that he set his own game alight. Smart kicked three goals in the second half, and two in the critical third quarter when the Crows claimed the game.